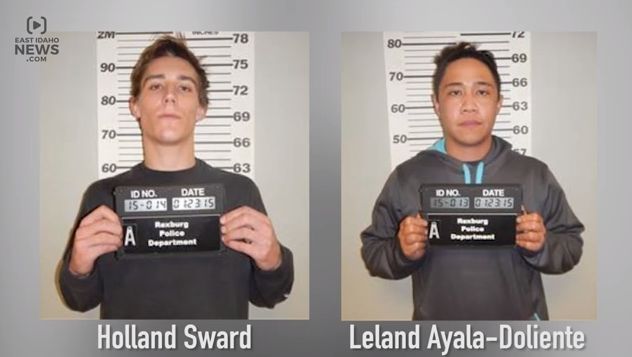 Two men trafficking drugs across Idaho became convinced they were being followed and called the police to turn themselves in. Watch the video below.

KSL.com has the transcript:

Ayala-Dolitente: Hi, uh, we’re the two dumb a—- that got caught trying to bring some stuff through your border and all your cops are just driving around us like a bunch of jack wagons and I’d just like for you guys to end it. If you could help me out with that, we would like to just get on with it.

Dispatcher: You got caught doing what?

Ayala-Dolitente: Ahh… okay. Um… We kind of got spooked here trying to bring some stuff across your Idaho border.

Ayala-Dolitente: And, yeah. A bunch of your cops driving around in a bunch of civilian cars not wanting to pick us up. I don’t know what’s the deal. I was just wondering if you could help us out and just end it.

Ayala-Dolitente: Yeah… if you could call one of them. I don’t know. It’s getting cold out here man. I just want to get warm and just get on with this whole thing so…

Dispatcher: Ok. Where you at right now?

Ayala-Dolitente: University Boulevard right next to the gas station and Applebee’s. All your buddies are around us so if you could help us out that’d be great.

Dispatcher: Ok… alright. Is it just you or is there anybody else with you?

Ayala-Dolitente: It’s me and my buddy that I brought with me and then we have a dog that we were gonna bring back to it’s owner but…

Ayala-Dolitente: She’s really cold in the car. She could use some food too.

Dispatcher: Ok. What was your name man?

Dispatcher: Leland… okay. Hold on just one second okay. Stay on the phone with me.

Want me to jump in the air and click my heels twice or what?

Dispatcher: Do you guys have any guns or weapons or anything on you at all?

Ayala-Dolitente: Nope we don’t have any of that stuff with us. Just a bunch of snacks and stuff.