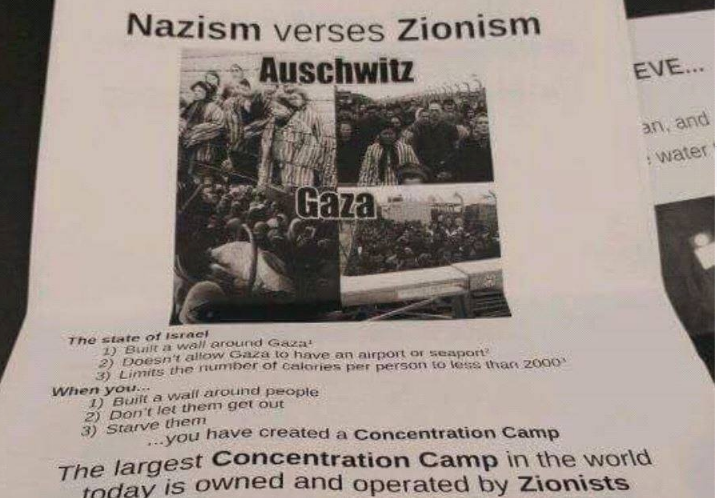 A university poster compares Zionism to Nazism, insisting that Israel operates “the largest Concentration Camp in the world.”

The poster, as well as several other ones discussing ending “Jewish privilege” and the legality of questioning the Holocaust, were spotted at the University of Illinois at Chicago this weekend, according to Campus Reform.

“The state of Israel built a wall around Gaza, doesn’t allow Gaza to have an airport or seaport, limits the number of calories per person to less than 2000,” explained the poster at UIC. “When you … built a wall around people, don’t let them get out, starve them…you have created a Concentration Camp.”

“The largest Concentration Camp in the world today is owned and operated by Zionists.”

Citing Pew Research data, this poster stated that Jews comprise 2 percent of the American population and that 44 percent of them are in the top one percent. It further uses a pyramid to depict its claim that nine-out-of-ten individuals in the top 1 percent of earners in America are Jewish.

“Today, anti-Semitic posters were found on campus that defame, insult and negatively portray Jewish members of our campus community,” said UIC in a statement to students, faculty, and staff regarding the latter poster. “Such actions do not reflect the values we hold as a community. Acts that invoke hatred or violence toward members of our community will not be tolerated on our campus.”

Two more posters lamented that Holocaust denial is punishable by prison in various countries and displayed the disproportionate percentage of Jewish students at prestigious universities.

“You are allowed to believe we never went to the moon, the queen is a shape shifting reptilian, and ‘the Globalists’ put chemicals in the water to make the frogs gay … but when you question the 6 million they put you in jail in 17 countries,” claimed the former poster.

“If Jewish Americans make up 2% of the population,” began the poster, “Why do they get a special Privilege when it comes to top universities?” it concluded.

This second poster featured the hashtags #BlackLivesMatter, #WeAreAllMuslim and #WhitePrivilege.