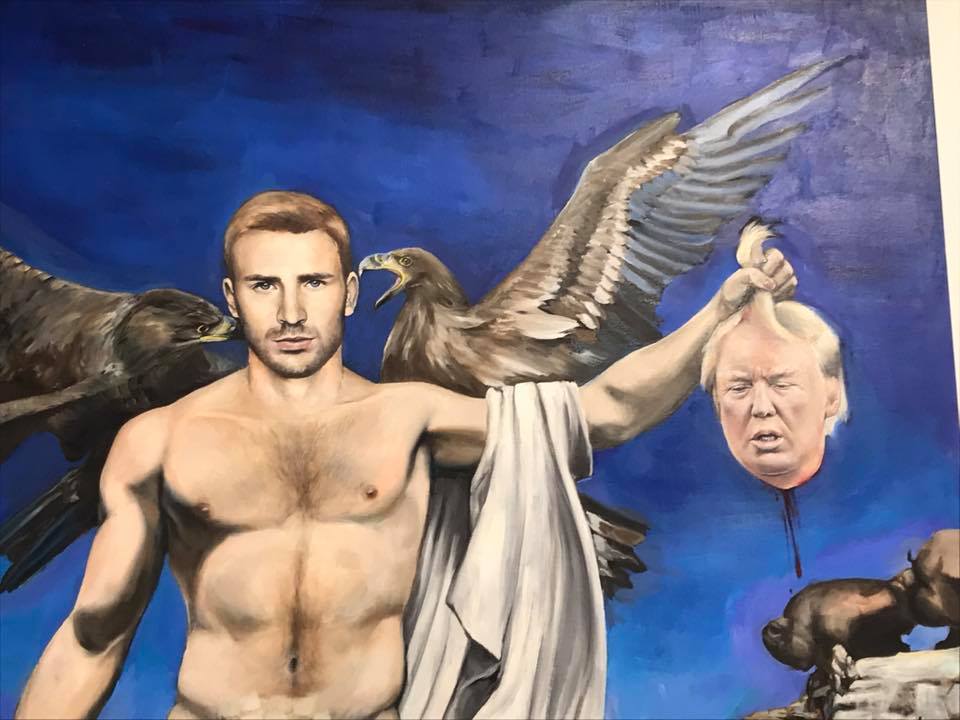 The work, created by Assistant Professor of Painting Thomas Chung, is being presented as part of a month-long faculty art exhibition in the university’s fine arts gallery, reports KTUU.

“It’s an image of the actor who plays Captain America, and two eagles are sort of screaming into his ears, and he’s holding the severed head of Trump, and there’s a young Hillary Clinton clinging to his leg,” Chung said to describe his painting, according to Campus Reform. “I was reminded of those 80’s rock posters, where there’s a woman in tattered clothes clinging to a strong male hero’s leg.”

A Facebook post by Paul Berger, a former UAA faculty member, shows that the painting is visible from outside of the gallery entrance and will be the first thing people see as they enter, reports Campus Reform.

“I’m not sure how I want to respond to this,” Berger wrote. “First thing that comes to mind is freedom of expression, fair enough (although, I might wager the severed head of our former president might illicit [sic] a different response from the administration of UAA and their student body). The second is public funding of our university system.”

Campus Reform explains that the painting has been the recipient of numerous complaints on campus, and a debate has started on its appropriateness.

“I was really torn about putting this piece up a faculty show, because I would never talk about my own political beliefs to my students,” Chung asserted, saying he wavered about putting the painting on display out of concern that it might make some students feel uncomfortable, Campus Reform reported. “But I realized that I feel very strongly about this, and I think even students that might be pro-Trump supporters could benefit from having a conversation with me about why I feel this way—why I painted this.”

Berger, who Campus Reform reports is a conservative, feels that the painting  represents a double standard in how people can talk about President Trump versus former President Barack Obama.

“Had the roles been reversed, and it was Obama’s head hanging there, I think the outrage would be fantastic,” Berger said. “As a free speech advocate, everyone has a right to express their opinion the way they want to express them. But as a parent and a citizen, there’s a discussion. In a university setting, what’s appropriate?”

Campus Reform has said that so far, the school is taking the side of the artist, allowing the painting to remain on display until the end of the exhibit on April 20.

Steven Godfrey, the chair of the Fine Arts Department, said that they would “protect” anyone who made a controversial piece of art.

“I guess the people are upset about the work that’s being shown,” Godfrey said, according to Campus Reform. “If they were taking a class at the university and made art that was considered controversial, no matter what their political or religious bent is, we would do our best to protect them and protect their rights to make that kind of work in the institution, whether it would be a student or faculty.”

Campus Reform reports that they have reached out to UAA for comment, but has received no response as of yet.

Can Taxation Be Replaced Through Advertising?
5 comments