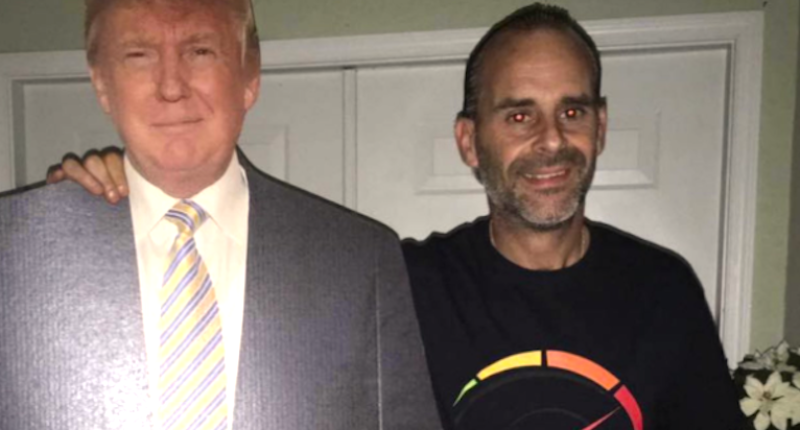 A man who President Donald Trump pulled on stage during a Florida campaign rally over the weekend said that he salutes a 6-foot cardboard cutout of the President every day.

Gene Huber, following his haven been pulled on stage by Trump at a rally, told CNN that he has been a supporter of the President for two years and is completely devoted to him. Huber said he lined up to get into the Melbourne rally at 4 a.m. Saturday, and because he was the first in line, he was interviewed by several local media outlets, which led to Trump seeing Huber’s loyalty on TV, reports The Blaze.

That wasn’t the extent of Huber’s devotion however, as he explained to CNN that he salutes a cardboard cutout of Trump each day.

“I’ve got a 6-foot cardboard box of President Trump in my house and I salute that every single day,” Huber told CNN. “And I tell him, ‘Mr. President, I pray for your safety today.'”

“I’m not lying,” he added. “I do that every single day to the president — but his cardboard.”

His statements backed up by his social media as his Twitter account shows a picture of himself and the cutout.

The Best Vistor I could ever have!
President Trump came to Florida to see me! Wow, never will forget [email protected] @thebestcloser pic.twitter.com/galTF85biz

As the conversation with CNN progressed, Huber explained his devotion to the President say, “It’s just the way he speaks, that truth, it comes from the heart. That’s the most important thing, it comes from his heart and he speaks the truth. I’ve never been into politics in my life up until President Trump came down the elevator — and he taught me everything”

Huber, when questioned about his opinion on the start of Trump’s presidency said, “He is doing fantastic!” Huber said. “There’s no words to describe what this man is doing. … He’s going to change the world.”

At the end of his interview with the outlet that Trump has called “very fake news,” Huber made sure to one last statement to CNN host Pamela Brown.

“Ma’am I appreciate the interview, let’s just be a little, little nicer to our President. Thank you so much,”

According to Reuters, Huber is a 47-year-old car salesman from West Palm Beach. Huber also told Fox News that being invited onstage by Trump was a “dream come true.”