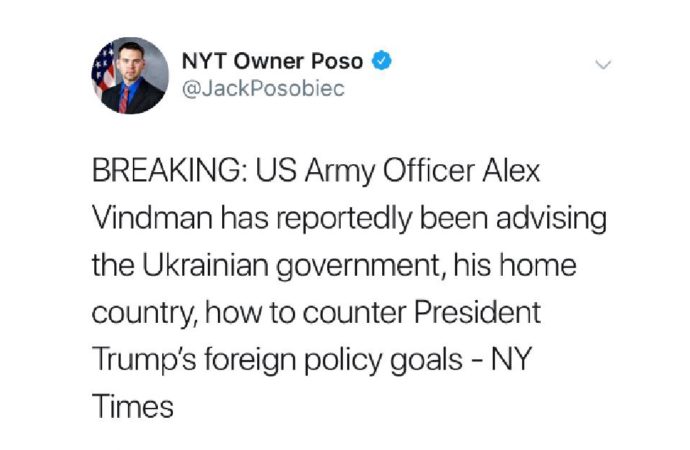 Alexander Vindman has about as clean and desirable a record that anyone could ever imagine in a veteran and diplomat, and a beautiful background story as an American immigrant to boot.

Born to a Jewish family in 1975 modern-day Ukraine, he and his family, having already withstood generations of Jew-hatred and pogroms in Russia, fled to America in 1979.

After graduating from SUNY Binghamton in 1998, he joined the United States Army, eventually achieving the rank of Lieutenant Colonel. In the Army, he even gained one of  the highest honors possible, being awarded the Purple Heart after surviving a roadside bomb in Iraq back in 2004.

His academic pedigree is no less impressive, boasting further degrees from both Cornell and Harvard.

Yet none of these endless qualifications were enough for hardcore Trump allies on Tuesday, who all apparently decided to have a contest to see who could delve to the lowest depths in smearing him.

Jack Posobiec, a man mostly known for circulating the bogus “pizzagate” conspiracy theory about Hillary Clinton, and also for plagiarizing the work of avowed white supremacist Jason Kessler in his old job at Rebel Media, first opened the barrage of conspiracies on Twitter.

He did so by deliberately misinterpreting a line from a New York Times article from Tuesday. The line said that “Ukraine officials sought advice from him” (Vindman) which Posobiec spun, saying that “Alex Vindman has reportedly been advising the Ukrainian government” – an assertion for which there is no evidence.

Laura Ingraham repeated the smear on her Fox News show, saying that “Vindman is a Ukrainian double agent” citing only his ability to speak Ukrainian as evidence for his purported treason.

Vindman was in the news on Tuesday for testifying in the budding impeachment inquiry being handled by Adam Schiff behind closed doors as to prevent hostile witness from colluding with one another to “get their stories straight” as it were.

Vindman is hardly the first American public servant to have bogus smears of dual-loyalty slung at him. The infamous Joseph McCarthy first popularized the smear in his anti-communist crusades of the 1950’s, characterizing anyone who disagreed with his hawkish domestic policies as “anti-American” and somehow loyal to Russia and the Communist Party.

The smear has historically been leveled against members of pretty much every non-Protestant group in America, from the Catholic Kennedy’s and their supposed undue loyalty to Rome and the Pope, and also to the Japanese unconstitutionally interned by FDR in World War Two. It is even more commonly a trope used to target American Jews, for their supposed “dual-loyalty” to the Jewish state of Israel, most recently by Rep. Ilhan Omar of Minnesota.

The sad truth is that this really isn’t something new for someone of Vindman’s background. Soviet Jews were constantly derided as “rootless cosmopolitans” by Stalin, and accused of having no loyalty to the Russian motherland, only to Israel.

It is clear to most onlookers at this point. that in their desperate attempt to defend Trump in the impeachment inquiry, there is no low to which Trumpists won’t stoop. Furthermore, they appear to be operating in a reality that irony does not exist in– using old anti-Semitic canards commonplace in the Soviet Union as they denounce the impeachment proceeding that they say is being done “Soviet-style.”

It is truly a tragic day in America when immigrants are subjugated to the same insults they fled, despite having fought for America their entire adult lives and continuing to do so.  In their deranged efforts to save America from the so-called “deep state” that they deride as un-American, Trump’s allies in the media run roughshod over the respect that American veterans deserve.

Vindman’s expertise in the Eurasia region combined with his impeccable military and defense credentials informed by his short-lived childhood in the Soviet Union should be heralded as uniquely American, not used as a weapon against his own credibility.