A University of Miami professor made some pretty bold statements on Tuesday, opposing Florida Sen. Greg Evers‘s ‘Campus Carry’ bill (SB 68). Evers says that the bill, which would allow concealed guns on Florida college campuses and Universities, will not only protect students’ constitutional rights, but will allow them “to actually protect themselves or protect others around them.”

Mary Anne Franks, a professor who specializes in self-defense law and is also an instructor in Krav Maga (an Israeli form of hand-to-hand self-defense), urged lawmakers to reject this legislation due to reasons having to do with the inability to use a firearm effectively. However, during the two-hour hearing on Tuesday, she gave no reason to believe that she is an expert on firearms.


The Sarasota Herald-Tribune reported her statements, which included citations to statistical data supporting that guns don’t help potential rape victims because they don’t know how to use guns effectively. Franks referred to the New York Police Department 18% “hit rate” in gun fights, stating that through extensive training, even they “struggle to use them effectively and accurately.”

The study she referenced was done by RAND, a nonprofit research organization providing objective analysis and effective solutions that address the challenges facing the public and private sectors around the world. In this study that was conducted between 1998-2006, the average hit rate during gunfights was indeed 18%. However, what Franks does not include in her facts is that police officers also hit their targets 30% of the time when suspects “did not return fire.”  In other words, police were able to have the upper hand because they were armed. Essentially, having a gun makes it more difficult to be killed by one.

Franks went on with an even larger bigger assumption when she said, “The fact of the matter is guns escalate aggression. They create a false sense of security. They encourage violence as a first resort.” What about the fact that criminals do not follow laws?

“Unless someone is going out on a date with her hand on a gun, this is not going to help her,” she continued.

This, coming from a woman who advocates hand-to-hand self-defense. This method would require one to be within arm’s length of the attacker. In addition, the simple fact is that an average-sized woman would have to be in exceptional physical condition to be able to overcome an average-sized male. Even a well-trained martial arts expert is no match for a bullet fired from eight feet away, much less a few steps away. Why should women be asked to rely on martial arts when a good man invented a gun to fight off the bad guys? This data proves that a gun is an equalizer.

Franks wants men and women to follow gun restriction laws that those who wish to do harm will not follow–leaving women on college campuses vulnerable and defenseless.

The U.S. Census Bureau conducts in-person interviews with several thousand persons annually for the National Crime Victimization Survey (NCVS) that also illustrate the contradiction to her statement regarding rape victims:

In 1992-2002, over 2,000 of the persons interviewed disclosed they had been raped or sexually assaulted. Of them, only 26 volunteered that they used a weapon to resist. In none of those 26 cases was the rape completed; in none of the cases did the victim suffer additional injury after she deployed her weapon.

Additionally, the Harvard Injury Control Research Center concluded that there is no evidence that licensed concealed carry leads to an increase in either violent crime or gun deaths.

Franks recently took to Twitter, further demonstrating how correlation does not always equal causation. She went on the defensive by chastising commenters for not using “facts” to defend their argument; meanwhile, she chooses to only draw attention to the data that supports her bias, and not present the whole picture. 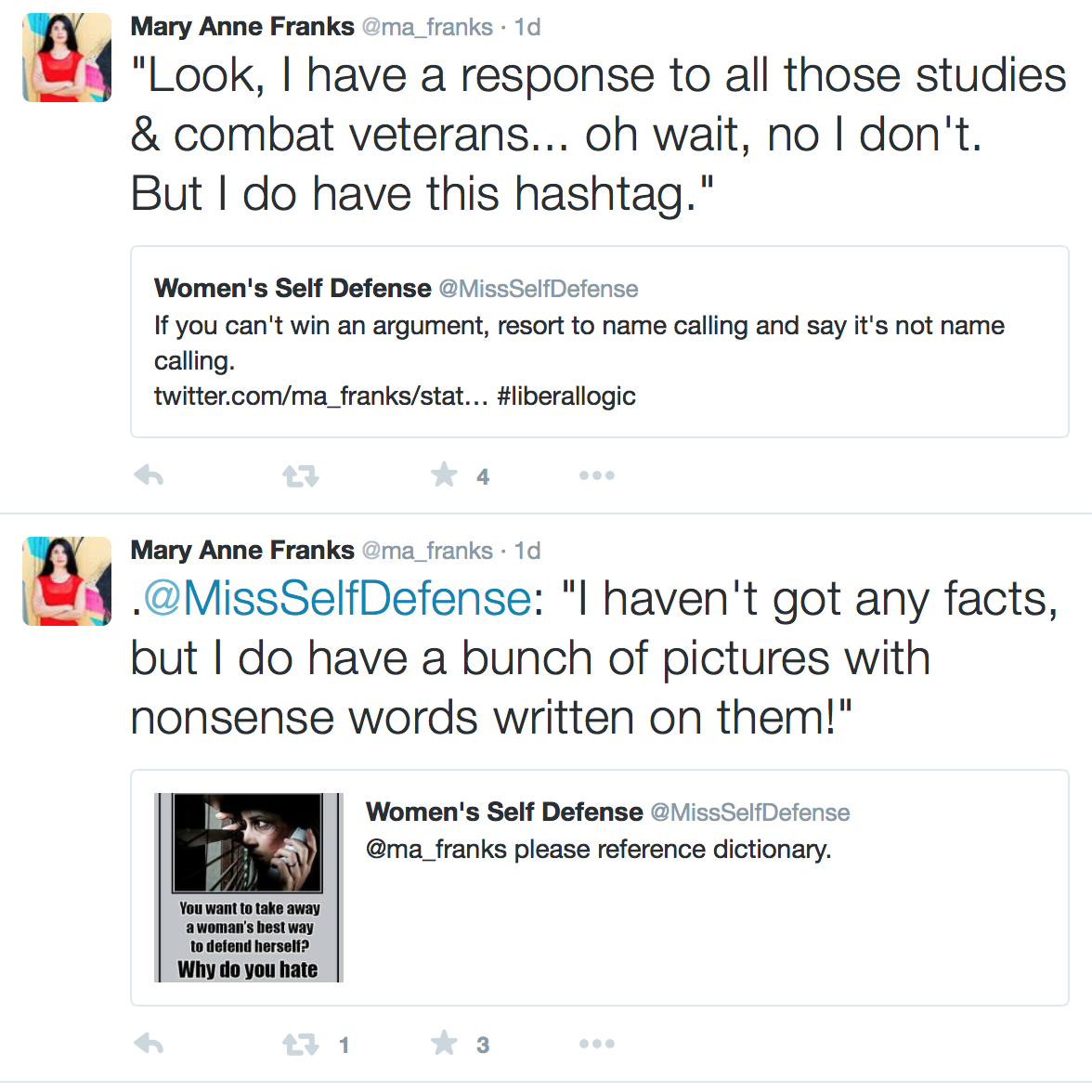 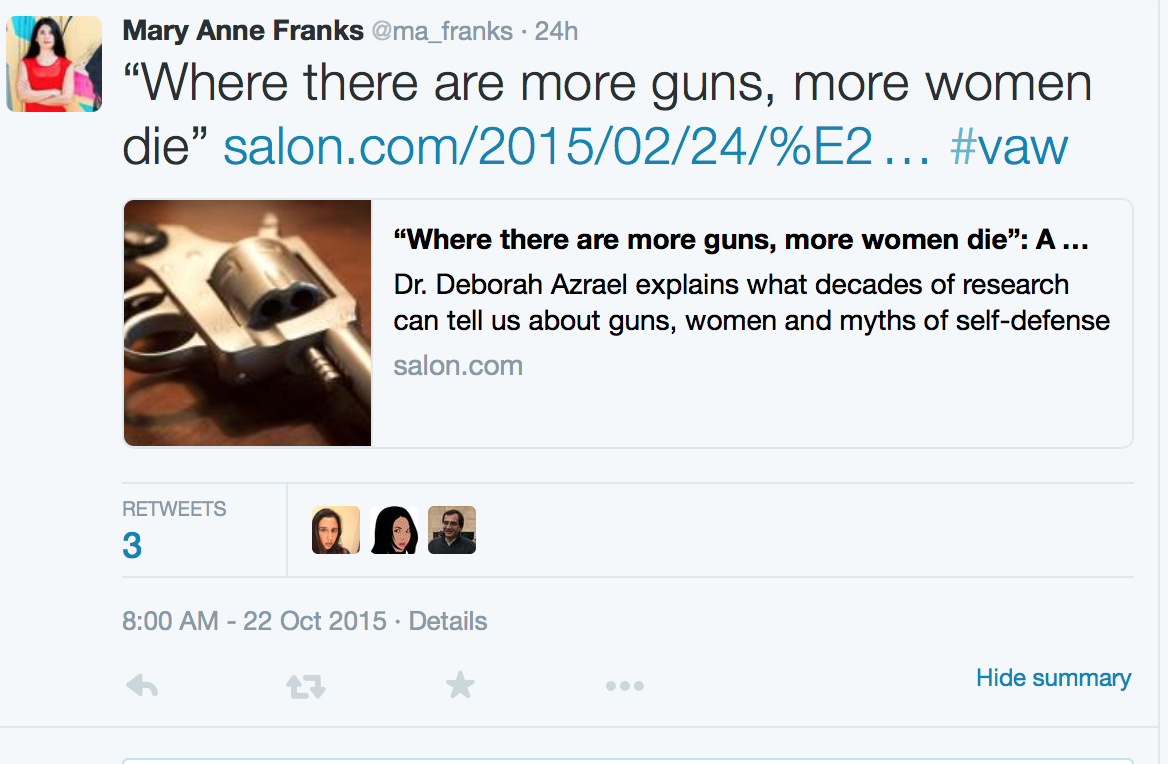 To clarify, her statement on guns do not discriminate. She tweeted: “Guns are a poor means of self-defense for all.” Yes, we hear you loud and clear, Mary Anne Franks. When criminals find it in their hearts to take your opinion into consideration, we’ll continue supporting the Second Amendment right to keep and bear arms.

The Florida ‘campus carry’ legislation passed in the Senate Higher Education Committee on Tuesday and will go before the Judiciary Committee.

French Man Faces Jail After Renting Out His Wife To 2,742 Men