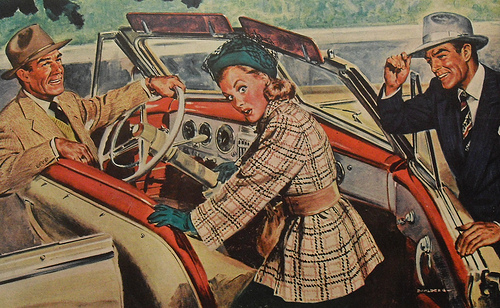 Do you hold the door open for women? Do you pay for dinner when you ask a woman out on a date? Well then, you’re probably a goddamn sexist pig!

That’s right men, no matter what we do, we can’t win.

Psychologists found that a friendly or chivalrous attitude can mask chauvinistic and patronizing views because the men see females as weak creatures in need of their protection.

They warned that this “benevolent sexism” was harder to spot than the hostile version borne out of an open antipathy.

Jin Goh, a psychologist from Northeastern University, Boston, in the U.S., said: “While many people are sensitive to sexist verbal offences, they may not readily associate sexism with warmth and friendliness. Unless sexism is understood as having both hostile and benevolent properties, the insidious nature of benevolent sexism will continue to be one of the driving forces behind gender inequality.”

Did you get that? You’re not being courteous or polite by holding that door for a woman. You’re doing it because you secretly believe women are too weak to open a door.

The study involved pairing 27 men and women aged 18 to 22.  They were filmed playing a trivia game together and chatting afterwards. Their interactions were then evaluated by experts who reported their impressions and counting non-verbal cues such as smiles.

Word count software was used to further analyze the behavior of participants.

The National Post goes on to say that “Scientists found that the more hostile sexist participants were perceived as less approachable and friendly in their speech and smiled less during the interaction.” and “In turn, those who displayed a benevolent sexism were considered more approachable, warmer, friendlier and more likely to smile. They also used more positive emotional words and were overall more patient while waiting for a woman to answer trivia questions.”

From the Daily Mail:

They found men whose answers led to them being classed as benevolently sexist smiled more while playing the quiz game and chatting.

They were more patient while waiting for their female partners to answer the trivia questions and warmer, friendlier and chattier than those who were hostile sexists.

Writing in the journal Sex Roles, the researchers said that while such behaviour may be well-intentioned, this doesn’t mean it isn’t harmful.

Men who are guilty of benevolent sexism see women as ‘warm and pure, yet helpless and incompetent beings’.

Thank goodness we have these ‘experts’ telling us what we’re thinking. For a moment I almost believed that I was just being polite or friendly, when in fact I was just patting women on the head for being “helpless and incompetent beings.”

The study included 27 men, of which only 21 were used (six omitted for various reasons) and from this “extensive” sample they were able to draw these conclusions to support their hypotheses, or was that agenda? I find it hard to tell sometimes with social “science.”

Thankfully most women, or at least the women that I interact with, are just as annoyed and dumbfounded by these conclusions.

Ladies, rest assured, I don’t hold the door open for you because I think you’re weak or need my assistance. I do it because it’s the nice thing to do.

And to look at your butts.

Top 10 Great Moments In The History Of American Liberty