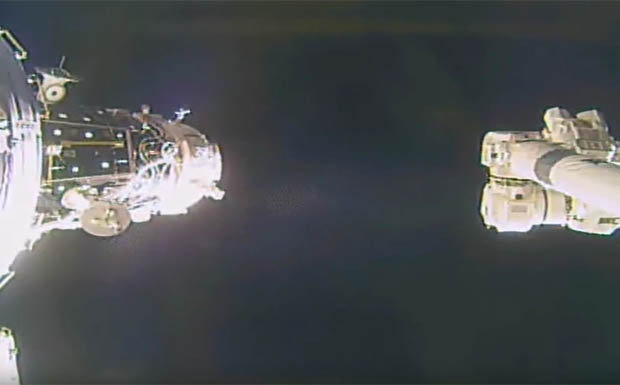 A video shows a larger round figure float past the International Space Station in footage shot by NASA, says the Daily Star.

At first, it appears that the camera is just shooting video of black emptiness, until you realize that the space of emptiness is moving from left to right.

Is it an alien mothership? Who knows… but it is amazing footage.

From the Daily Star:

In his caption to the video, he pointed out he wasn’t for certain saying it was a “huge mothership or any sort of alien spacecraft” but that it “certainly looks unusual”.

Alien enthusiast Streetcap1 posted the footage to his YouTube channel on Saturday (March 19).

As he watched the mysterious shape move past, he said: “You see a big shadow coming across the picture.

But some of his loyal fan base did reach the conclusion it was proof of extraterrestrial life.

“OMG, a mothership,” one user wrote.

Another added: “Some f***** up s*** is going on out in space and it’s slowly becoming known. Be aware I’m pretty sure more events are still to come.”

Other followers suggested it could have been the filter in the camera moving out of screen, or simply the sun’s light coming around.

But one viewer pointed out: “The background is completely obscured by whatever that large object is.

“How can it be a shadow or an eclipse?”

It comes after another strange video surfaced claiming to show alien crash sites on the moon.

And there are some that believe alien bases still exist on the moon.