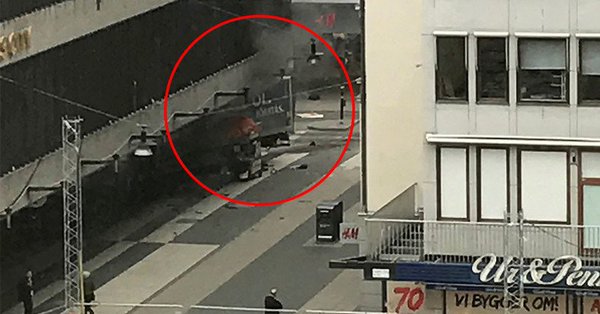 MALMO, Sweden — A truck rammed into a crowd of people Friday in the Swedish capital of Stockholm, killing at least three.

The attack took place at a busy intersection in central Stockholm around 3 p.m. local time. A reporter for public radio station SR said he spotted at least three dead and several injured people on the ground.

“I saw at least three dead, but there are likely more,” the reporter said. “It’s a complete mess.”

Something’s happening on Drottninggatan and around Stockholm. pic.twitter.com/YPbrZSe5Mb

Police have launched an investigation into a possible terror attack.

Eye witnesses said the truck belonged to a popular beer brand. It’s unclear who was behind the wheel.

“It crashed into a window a few meters from us,” an eye witness told public broadcaster SVT. “I heard glass getting shattered and people screaming. There are police and people everywhere. People are running from the scene.”

The suspect behind the attack has been detained by police says RT.