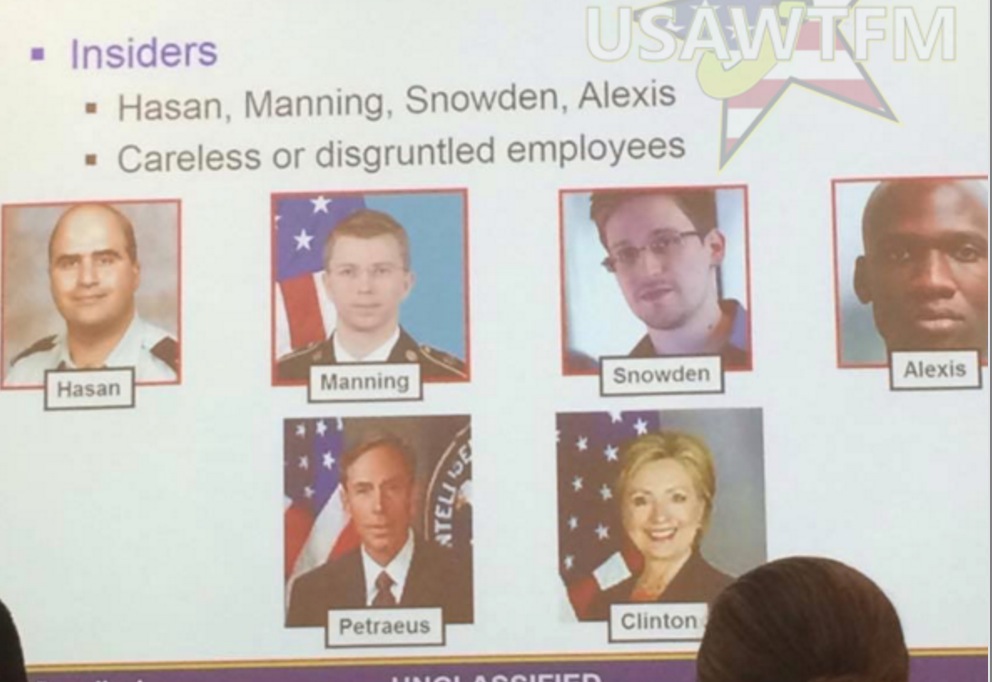 Admins of the Facebook page “U.S. Army W.T.F! moments” told The Daily Caller News Foundation this is the second time they’ve received a picture of this particular slide in the last six months. They posted the slide to their page Sunday.

Admins said the picture came from a servicemember stationed at Fort Leonard Wood in Missouri.

On the second row, the brief pictures Clinton and Petraeus. The text of “careless or disgruntled employees” echoes FBI Director James Comey’s description, “extremely careless,” of Clinton’s handling of top secret and classified information when she served as Secretary of State. Comey then went on to recommend to the Department of Justice that no criminal charges be filed against her.

“None of these emails should have been on any kind of unclassified system, but their presence is especially concerning because all of these emails were housed on unclassified personal servers not even supported by full-time security staff, like those found at agencies and departments of the United States government — or even with a commercial email service like Gmail,” Comey said.

The State Department has released around 30,000 of Clinton’s emails. Clinton deleted the rest, numbering around 32,000, saying they were merely personal messages and not work-related.

Retired Army Gen. David Petraeus, who served as director of the CIA from September 2011 to November 2012, is also listed in the slideshow.

In April 2013, the FBI seized eight binders full of classified info from Petraeus’ home. He had kept the binders in an unsecured drawer in his house.

In April 2015, Petraeus pleaded guilty to a misdemeanor charge of mishandling classified information. As the brief suggests, he is a quintessential example of an insider handing over classified materials to people not authorized to view them.

It’s unclear to what unit the opsec briefing was delivered. Army public affairs did not respond to a request for comment from The Daily Caller News Foundation.

WATCH: Democrats Unable to Identify Quotes from Trump and Clinton