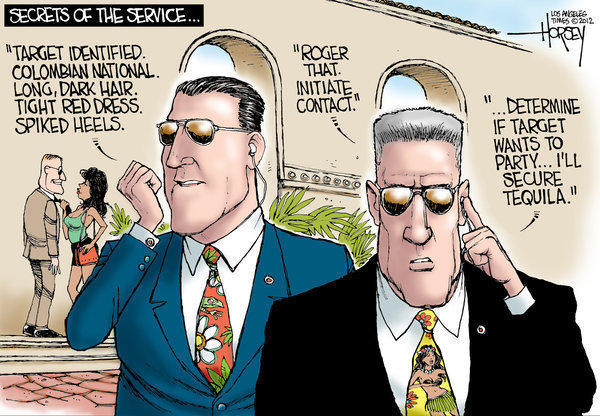 A Secret Service agent assigned to Vice President Mike Pence’s detail has been suspended after being arrested last week for consorting with a prostitute at a Maryland Hotel.

The unidentified agent was relieved of his weapon and was placed on administrative leave, CNN reported. An agency spokesman acknowledged that the Secret Service “is aware of an alleged incident” and is “exploring the full range of disciplinary actions.”

Law enforcement sources told CNN that the hotel manager called police after becoming suspicious of activity in one of the rooms. The agent, who was not on-duty at the time, was arrested for solicitation after responding officers saw him exit the hotel, police said.

The arrest is the latest dent in the Secret Service’s reputation, which has seen its carefully cultivated image as an elite protection force tarnished in recent years with alcohol and prostitution scandals.

In 2014, three agents on former President Barack Obama’s detail were sent home from an advance trip to Amsterdam after one was found passed out drunk in a hotel hallway. A bigger black eye came in 2012, when nine agents were either fired or left the agency in the wake of a prostitution scandal in Cartegena, Colombia. In that incident, agents allegedly refused to pay prostitutes they had brought to their hotel after a night of clubbing.

Security lapses have also been a recurring problem at the Secret Service under both the Obama and Trump administrations. Last month, a man with a history of mental illness climbed over an outer perimeter fence and roamed the White House grounds for 17 minutes before he was apprehended by agents. (RELATED: Report: Laptop With Trump Tower Floorplans Stolen From Secret Service Agent)

Former Secret Service agent Dan Bongino believes the incidents are the result of a “systemic” and “top-down” failure of management.

A Secret Service spokesman said the suspended agent self-reported his arrest to his superiors. The incident is being investigated by the agency’s Office of Professional Responsibility, he said.

Rand Paul on Syria: Military Action Must Have Congressional Approval