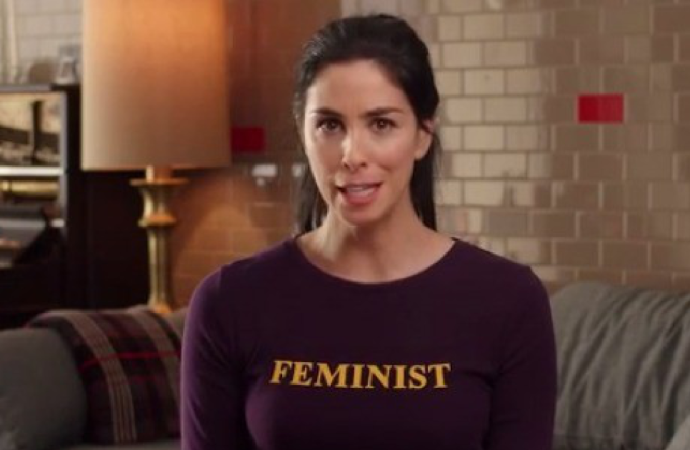 On February first,  The Lady Parts Justice League, (founded by Daily Show creator Lizz Winstead) held a “telethon,” called “Life is a Living Nightmare: A Telethon to Fix it”.

The fundraiser, hosted by Winstead herself, alongside comedian Sarah Silverman, featured almost four hours of bizarre content, including abortion charades, an interview with abortionist Willie Parker, and political rants.

During one of the charades, Silverman announced that a conscience clause law that prevented aborted fetuses from being used in manufactured food products would be something that “would make her want to eat an aborted fetus.”

The charades entitled “shitty law charades” were introduced by a woman wearing a costume of the female genitalia.

Two of the laws that were meant to be acted out by volunteers were “You cannot use aborted fetuses as ingredients in the manufacture of food products,” and “Clinics are mandated by law to cremate or bury every aborted fetus.”

While explaining the concept of the conscience clause laws Silverman summed up her views of religious liberty saying quote, “Religious freedom used to be such a beautiful thing cuz it was like this big inclusive thing in the country, and now it’s just this shroud to legalize hate and shit like that.”

After the first charade was acted out in graphic detail, with one of the volunteers yelling “kill the baby!”, Winstead explained, “This is fucking batshit. A lot of times they will create laws to make you think that this is some epidemic that needs to be addressed.”

Silverman further comments, “if anything has ever made me want to eat an aborted fetus, it’s this law.” The law in question, legislated in Oklahoma, was created in response to a claim that a food lab was considering using stem cells to create artificial flavors.

The second charade brought on another vivid rant by Silverman saying quote, “Fucking funerals for fucking aborted fetuses? I would like to speak at those funerals. He lived the way he died. He died the way he lived. The size of a sesame seed with no discerning brain function.”

Mark Hamill , of Star Wars fame, was also present at the event. He spent the majority of the livestream off camera working on two pieces of art to be auctioned off, which were presented at the end of the show.

Hamill also announced that, “Disney gave us a Last Jedi poster, and when we figure out who wins, I’ll personalize it. I’ll write something obscene and dirty if you want.” Wait, Disney donated to Lady Parts Justice League?

Winstead laughed and announced, jokingly, “Mark Hamill is actually going to become an abortion provider.  He’ll give you an abortion with a Jedi wand. It’s going to be awesome.”

Near the end of the live-stream, Winstead started to cry as she spoke about abortion providers: “These people that provide this amazing care for people are demonized and shunned and they provide literally a pathway to somebody’s life every single day. And if we let them have to provide the care and defend what they do, when we’ve all used it to become better people, we’re doing a disservice to our society. And so that’s why we do the work.”