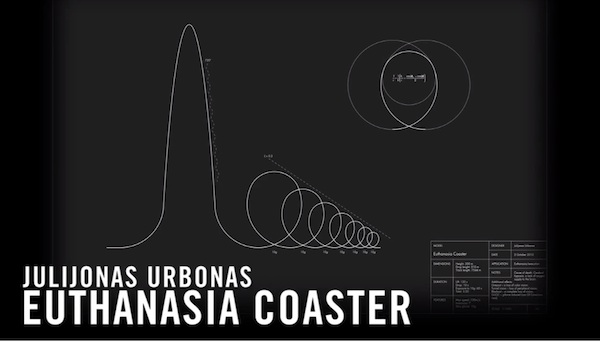 The Best Way To Die?

Julijonas Urbonas designed a roller coaster with a sole purpose in mind, to kill a human being.

‘The Euthanasia Coaster’ as it is called is engineered to humanely take a human life by inducing G-Force speeds that will send a human being into a euphoric state before causing a loss of consciousness and eventually death from lack of oxygen to the brain (cerebral hypoxia).

The project was the combination of efforts across disciplines such as space medicine, mechanical engineering and fairground psychology in order to produce a pleasant death. The kinetic sculpture is meant to celebrate the limits of the human body.

Former president of the famed Philadelphia Toboggan Company John Allen once said, “the ultimate roller coaster is built when you send out twenty-four people and they all come back dead. This could be done, you know.”

Urbonas believes that the coaster will one day actually be built when “the politics of technologies are less centralized and more creative, diversified and democratic.” Also, he says that when his time comes, he will try it out.

Should people have the right to choose when they want to die? We discussed this on a recent episode of the Freedom Report Podcast