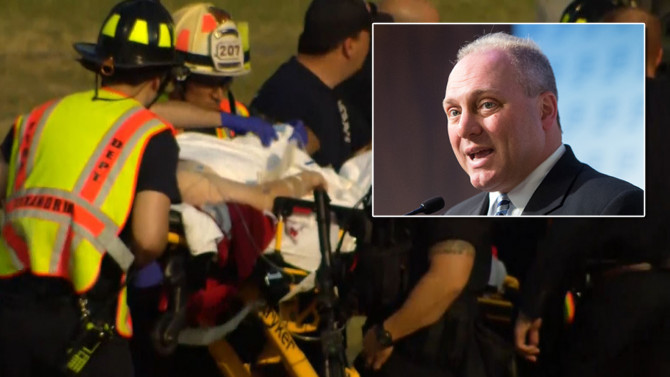 Earlier on Wednesday, James T. Hodgkinson, a 66-year-old home inspector from Illinois who had several minor run-ins with the law, opened fire on Republicans practicing for the 2017 Congressional Baseball Game for charity. The gunfire hit House GOP Whip Steve Scalise (R-LA) sending him and 4 others to the hospital.

The newest update out of ABC News is that MedStar Washington Hospital tweeted that the GOP House leader, who was reportedly shot in the hip and rushed to the hospital, is now in “critical condition.”

Initial reports said that Scalise had to drag himself off the infield leaving a trail of blood, as gunfire continued, as colleagues rushed to his assistance.

Hodgkinson, per his social media accounts, was extremely anti-Trump and Republican. He belonged to a Facebook group called “Terminate the Republican Party,” and reports of potential contacts with him, by Congressman in the parking lot at the field, say that he was asking about the party affiliation of the legislators who were taking batting practice.

Rep. Ron DeSantis, (R-Fla.), told CNBC that a man came up to him and Rep. Jeff Duncan, (R-S.C.), at the practice and asked if the players on the field were Republicans or Democrats.

GOP Rep: Open-Carry Would Protect Members Of Congress In The Future