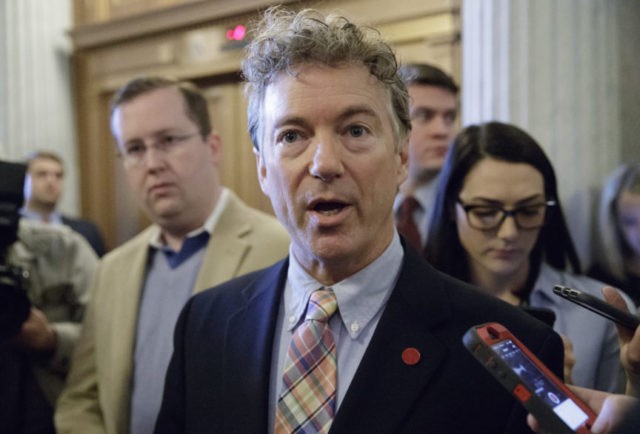 Rand Paul wants to know, was he spied on by the US government?

Kentucky Senator Rand Paul is not shy about his feelings toward the surveillance state and the overreach of the Intel community into American lives, and with the revelation that the Obama administration conducted more than 35,000 searches on NSA intercepts seeking information about Americans during the divisive 2016 election year, according to Circa, the firebrand liberty-minded Senator wants to know… Was he spied on by President Barack Obama or his administration?

I have formally requested from the WH and the Intel Committees info on whether I was surveilled by Obama admin and or the Intel community!

The tweet appears to build off of President Donald Trump’s claim that the Obama administration wiretapped Trump Tower during last year’s presidential race, reports the Hill. An accusation that FBI Director James Comey has flat out denied.

Paul is not satisfied with Comey or anyone else’s explanation of the situation, especially given the new information regarding the Obama administration. The Republican Senator was left to wondered if anyone else in Congress had their privacy invaded asking again on Twitter:

Did the Obama admin use warrantless "wiretapping" on other candidates besides @realDonaldTrump? https://t.co/h7rsjvNLHM

Following up on his Tweets, Sen. Paul spoke to Breitbart News about his line of questioning, claiming that he has had “several people come forward” to say his presidential campaign was spied on.

“We’ve had several people come to us and say that it happened. I don’t have access to that information, but I’ve been very concerned that too many Americans’ information is being culled through without a warrant,” he told Breitbart News.

“I don’t have any facts to say it happened,” he said. “But numerous sources are coming to us saying it did happen so I want to search through, find out why I wasn’t notified. Was it on purpose?”

“There’s a lot of things to be found out, particularly since we found out that Susan Rice was unmasking people and we need to know was there a political motivation, because one of the real dangers in a free society is if government gets so powerful it’s listening to all of our phone calls, the possibility of extortion, the possibility of blackmail — all of that goes up exponentially,” he said.

“I can’t for the life of me think of any reason why I would be part of an investigation. And it also goes further to prove that maybe we have an intelligence community run amok if they’re looking at political figures, because I had nothing to do with any of the other things,” he added.

On Friday, Sen. Paul said, in a speech for CATO, that he has resent a formal request to the White House asking that the administration “promptly investigate” whether his name or the names of other members of Congress, individuals from their staffs or campaigns, were included in queries or searches of database of the intelligence community, or if their identities were unmasked in any intelligence reports or products, according to Breitbart.

Like Sen. Paul, the entire legislative body should be up in arms over the potential ramifications of this situation. Especially the Left, because if Pres. Obama has opened the executive powers to overreach this far, you can expect that Pres. Trump won’t hesitate to return the favor.

Trump will ultimately hold the key to discovering the truth behind these questions as Circa reports:

“The law makes President Trump the ultimate declassifying authority, and we believe the president can answer many troubling questions by declassifying this information, including how often First Amendment protected professionals had their privacy impacted by NSA intercepts and why some of Trump’s own aides were unmasked in NSA data by the prior White House,” said John Solomon, the chief operating officer of Circa.

If You Die Because Of AHCA, This Group Will Help Send Your Ashes To Congress