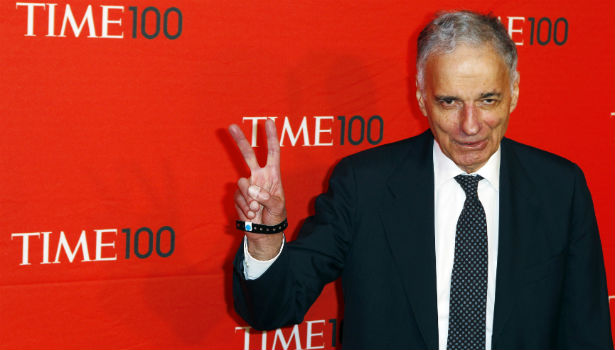 Ralph Nader (he’s still alive) recently called out Hillary Clinton for being a war hawk because she’s “compensating” for her gender by being overly “militarist” and “macho.” He also said that when she sat on the Senate Armed Services Committee, Clinton “never met a weapons system that she didn’t like.”

“I think Hillary is not the Hillary of when she was 30 years old. She made peace with the power structure and she is a deep corporatist and a deep militarist. One can almost forgive the corporatism. She moved to New York with Bill because that’s where the power is and Wall Street but her militarism is absolutely shocking,” Nader said during a discussion about his new book (that no one will read), Return to Sender.

“This is the problem of women trying to overcompensate in becoming more aggressive and macho so they are not accused of being soft on the need to kill and war, right? Instead of taking the tradition of women of peace, and turning into a muscular waging of peace of conflict and prevention, she [Clinton] did the reverse, and [Madeline] Albright did the reverse and Anne Marie Slaughter did the reverse and some of Obama’s advisers did the reverse,” he said. “We have to be transcendent on this. We have to really go right to the core of what people are standing for, fighting for and fighting against.”

“She almost singlehandedly did the Libyan war. The Defense Department was against it, [Secretary Robert] Gates, and she persuaded the White House that it was an easy topple without knowing that in a tribal society with nothing to replace it you would have a civil war, sectarian killings spilling into Africa, weapons everywhere, Mali, central Africa and she’s being accused of Benghazi – the big thing is the huge amount of geography that has been destabilized because of the Libyan overthrow,” he said.