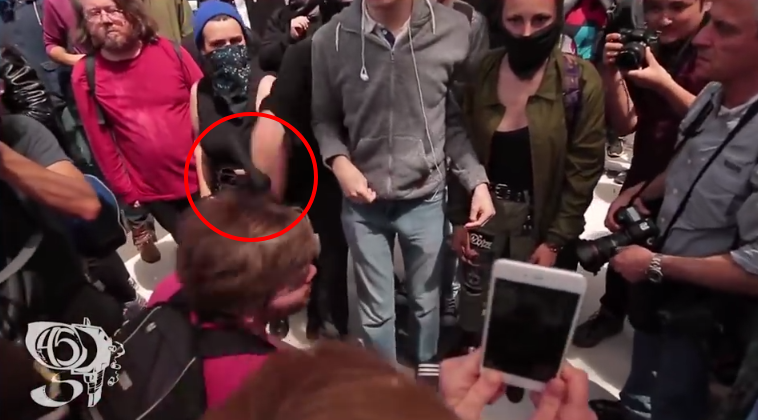 Police arrested a former professor Wednesday who allegedly used a bike lock to assault a man at an April rally in Berkeley, Calif.

After 4Chan identified Eric Clanton, a man who taught at Diablo Valley College in California, as the perpetrator behind an assault at an April 15 Trump rally, police placed him in custody, according to the East Bay Times. Authorities arrested Clanton due to suspicion concerning his use of a firearm in a felony and assault with a non-firearm lethal weapon.

Masked and clad in the black clothes of an anti-Trump antifascist, Clanton allegedly attacked at least one person with a bike lock, causing the victim to bleed profusely from the head.

While investigating Clanton, 4Chan users matched the former professor’s facial structure, jeans brand, shoes and backpack straps to that of the assailant. Berkeley Police arrested Clanton over a month after 4Chan’s evidence surfaced.

Clanton, who is being held by police with a $200,000 bail, taught ethics, philosophy and critical thinking at Diablo Valley College, reported Heat Street. He obtained a bachelor’s degree from California State University, Bakersfield, and a master’s degree from San Francisco State.

Clanton is held at Berkeley Jail and faces an arraignment Friday morning at Wiley W. Manuel courthouse in Oakland, California.

The Daily Caller News Foundation reached out to the Berkeley Police, but received no comment in time for publication.

Content created by The Daily Caller News Foundation is av