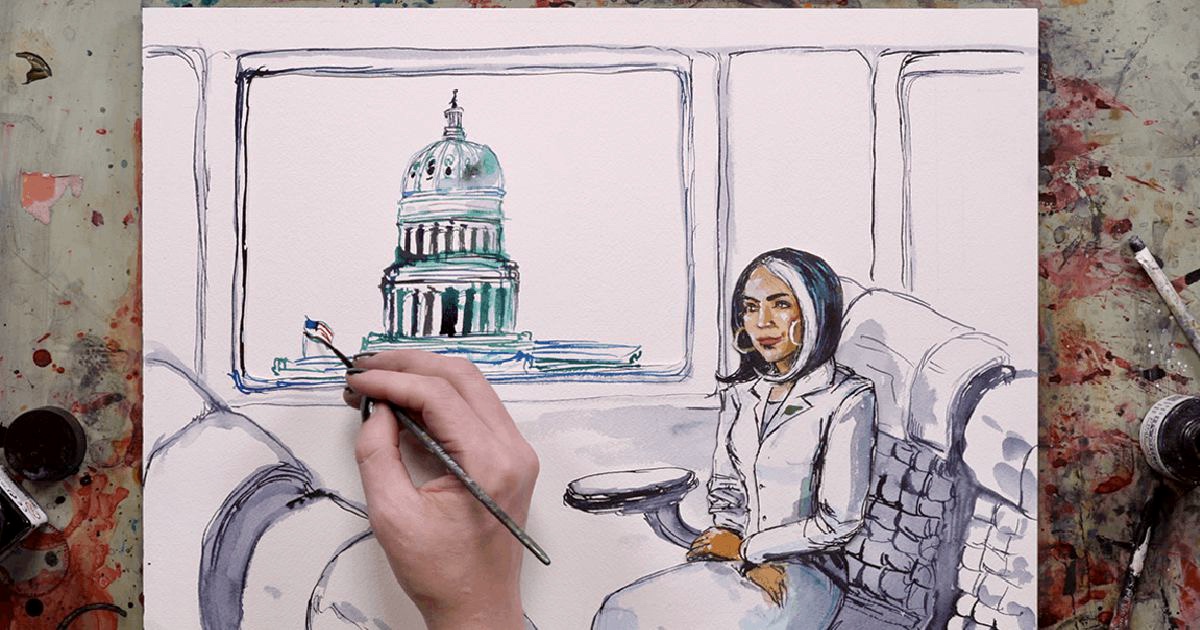 Rep. Alexandria Ocasio-Cortez released a video depicting a utopian future because of the Green New Deal.

Democrats take control in 2020 and create a “society that was not only modern and wealthy, but dignified and humane too,” Ocasio-Cortez says in the video.

Energy experts and economists are skeptical the Green New Deal is possible or even desirable.

New York Rep. Alexandria Ocasio-Cortez released a video depicting a utopia where the Green New Deal turns the U.S. into a democratic socialist utopia, complete with a bullet train from New York City to D.C.

The video depicts a future where the Democrats take the Senate and White House in 2020 and enact a Green New Deal that ends up creating a “society that was not only modern and wealthy, but dignified and humane too,” Ocasio-Cortez says in the video.

Ocasio-Cortez says Americans need to close their eyes and “imagine” a Green New Deal society before it can happen. Meanwhile, energy experts and economists are skeptical the Green New Deal is possible or even desirable.

“We need to be able to close our eyes and imagine it,” Ocasio-Cortez says in the seven-minute cartoon. “We can be whatever we have the courage to see.”

Climate change is here + we’ve got a deadline: 12 years left to cut emissions in half.

A #GreenNewDeal is our plan for a world and a future worth fighting for.

How did we get here?
What is at stake?
And where are we going?

Ocasio-Cortez introduced the Green New Deal in February, bungling the bill’s roll-out and creating confusion over her signature legislation. Massachusetts Senator Ed Markey introduced a companion bill in the Senate.

The video comes after the Green New Deal fell flat in Congress. The Green New Deal bill got zero votes in the Senate when it was brought to the floor, and parts of it were rejected by House Democrats during a committee hearing — including a “no” vote from Ocasio-Cortez.

Ocasio-Cortez teamed up with Justice Democrats, anti-capitalist author Naomi Klein and The Intercept, a news organization. Ocasio-Cortez said she’d been collaborating “for months” to get the video finished.

(Somehow all this work, including dismantling pipelines, is accomplished without gas-powered construction equipment.)

Ileana eventually becomes a teacher, then gets elected to Ocasio-Cortez’s seat in Congress. Ocasio-Cortez is, of course, recounting all this while riding high-speed rail from New York City to Washington, D.C.

Of course, it’s not all rainbows and butterflies, according to Ocasio-Cortez. Sometime in the future, Hurricane Sheldon hits southern Florida and “parts of Miami went underwater for the last time,” the congresswoman says.

However, Ocasio-Cortez says Americans were “lucky” to have enacted a Green New Deal and moved away from fossil fuels when they did — though climate models show the Green New Deal would have no material impact on projected warming.

“But as we battled the floods, fires and droughts, we knew how lucky we were to have started acting when we did,” Ocasio-Cortez says.