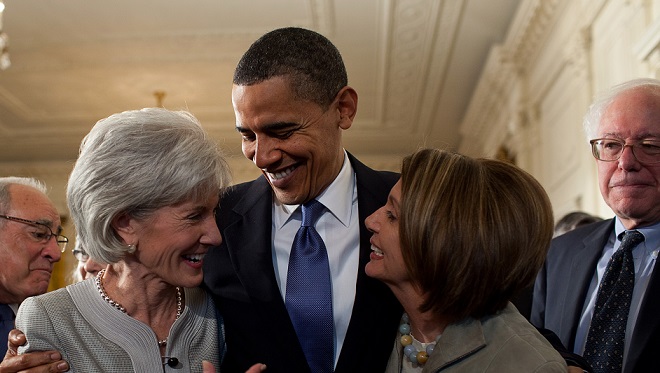 Susan Reimer, columnist for the Baltimore Sun, asserts that Fox News’ John Stossel is only highlighting the scheme’s dependency on coercing young, healthy adults into participation because ObamaCare remains undefeated. By exposing unfairness to men, conservatives are whipping up “selfish” young men now required to pay exorbitantly higher costs for services they use less or not at all.

Under Obamacare, insurers are legally required to provide coverage to all applicants, regardless of medical history, with a partial “community rating” system for premiums, which means that insurers must set premiums based (mostly) on geography and age, rather than sex and (most) pre-existing conditions.

Information from the National Center for Health Statistics indicates women between 18-44 use physician offices, hospital outpatient departments and hospital emergency double to men. In 2011, hospital stays for women 18-44 were triple that of men.

So how much more do they pay? Forbes’ Manhattan Institute survey of pre-ACA premiums found that a 27-year old woman’s premiums were 25% higher, 40-year olds 21% higher and for 64 year olds, women paid 7% less than men. A far cry from rates being “10 times” higher as Reimer claims. These are not grand differences, nor does the discrepancy indicate some institutionalized sexism because women simply use healthcare more throughout life.

As economist Robert P. Murphy explained, “If the government has to force employers to provide a benefit to their employees, it means it’s unprofitable; otherwise the employers would have already done it as part of their compensation package in order to attract quality workers. So if this costly, unprofitable employer mandate only applies to firms with 50 or more employees, and even then only applies to those employees who work 30 or more hours, then we shouldn’t be shocked — shocked! — to discover firms not growing past 49 employees, and/or limiting people to 29 hours per week.”

ObamaCare’s elimination of gender-based insurance premium differentials unfairly penalizes men significantly, however, but this is not a gender war. It’s just bad policy. Gender is an actuarially valid category, along with age, occupation, and location. Companies do not know an individual will cost them more on gender basis alone, but assign wagers (participation fees) based on risk assumptions.

Reimer fails to grasp this. She says, “Isn’t that what insurance is for, to spread the risk?”

Insurance is risk transfer, yes, but spreading risk is half the equation. “The other half is to provide each consumer with feedback on the amount of risk being transferred,” Steve Williams correctly notes.

Further, forbidding for-profit insurers from calculating adequate charges for the risk potential alters the contractual nature of insurance. As taught in Econ101, this has unintended consequences, such as risking the sustainability of the overall program. John Stossel understands this rather well.

ObamaCare is unfair to men in several other ways. Encouraging men to continue treating illness over health prevention will raise collective costs. The option to individualize coverage is banned. Male and female consumers pay for unwanted or needed care, such as maternity, mental health and preventative care. Women’s choices and wallets will also unnecessarily suffer. This is neither fair nor logical. [contextly_sidebar id=”1e39f4fedb828ef527ebb68ae99576a9″]

Unsurprisingly, Reimer concludes her hit piece by quipping, “So let’s put this whole “she uses more, she should pay more” argument to rest. Or I am going to ask for a rebate for all the extra children I didn’t send to public schools, and a tax refund for all national parks I haven’t had a chance to visit and all the highways and all the bridges I would have had to use to get there. That should make us about even.”

Really, we should all get a refund, but denial doesn’t facilitate effective policy. These ludicrous arguments underscore how ObamaCare’s defenders simply fail to grasp economic realities. Fairness isn’t the guiding principle or women would pay more for health insurance because women consume more health care.

One-sized-fits-all approaches to complicated markets usually lead to failure; price controls and state intervention often lead to shortages and resource misallocation. So no matter how much the Reimer’s of the world attempt to politicize its flaws, ObamaCare is doomed.

If we can’t trust the BBC, how on earth can you?