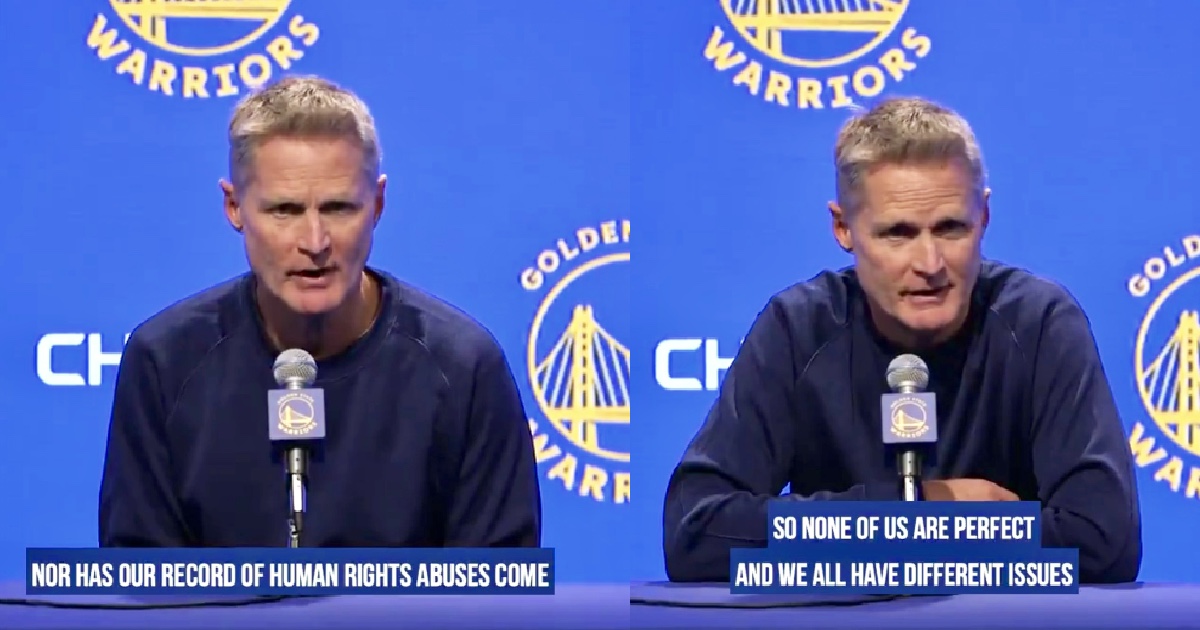 In a shocking new low in the NBA’s antics defending the Communist regime in China, a flabbergasting video made the rounds on Twitter, Thursday night. In this video, Coach Steve Kerr of the Golden State Warriors compares the human rights abuses of China to the situation at home in America.

Steve Kerr on if he's ever been asked about human rights during his previous trips to China:

"No. Nor has (America's) record of human rights abuses come up either… People in China didn't ask me about, you know, people owning AR-15s and mowing each other down in a mall." pic.twitter.com/56mNC7LmID

When prodded on if he’s ever been asked about human rights during his previous trips to China, he responded with:

“No. Nor has (America’s) record of human rights abuses come up either… People in China didn’t ask me about, you know, people owning AR-15s and mowing each other down in a mall.”

Putting aside the fallacy of attributing the actions of a psychopathic individual to the human right rights record of a country at large, Kerr seems to think that America, a secular and liberal Republic, is somehow comparable to a Communist autocracy.

China’s human rights record is historically abysmal and still among the worst in the world to boot. For example, China is currently:
– committing an ethnic cleansing of Uighur Muslims using nazi-style concentration camps,
– going over the head of a treaty enacted to protect the sovereignty of Hong Kong (TLR has covered this story here, here and here),
– enacting a Orwellian system of social credit scoring, complete with perks and punishments doled out the state, and
– is home to the most comprehensive anti-privacy surveillance state the world has seen.

The US certainly has its own share of anti-liberty problems, like police brutality, civil asset forfeiture, and its own obtrusive domestic surveillance program, but to equate the two countries is mind-numbingly stupid.

This incident comes on the heels of the NBA undertaking a series of moves in what appears to be an attempt to become China’s favorite bootlicking enterprise.

In the last week alone, the NBA took steps to censor General Manager Daryl Morey of the Houston Rockets after he posted a milquetoast, anodyne tweet supporting the protests in Hong Kong. They also kicked out fans and took away signs from others that were protesting the various aforementioned human rights abuses in China.

To clarify, the NBA has as much a legal right to take these actions as the NFL did when they allegedly colluded to keep Colin Kaepernick out of a job after his controversial kneeling for the national anthem.

But the issue in this case isn’t what is and isn’t legally right, it’s about the morality of the issue. Both David French of National Review and Bari Weiss of the New York Times have put out fantastic opinion pieces criticizing the morality of the NBA doing China censorious dirty work for them (French’s piece can be found here, and Weiss’ here).

The NBA should be ashamed of itself for bending over backwards to be the boot-boys of one of the most evil modern autocracies. Unfortunately, their actions keep getting worse as they double down in their disgusting game, playing for Chinese cash at the expense of basic American tradition.

Chinese Government Claims To Be Victim Of Coronavirus Disinformation, Turns Around And Accuses US Of ‘Hiding Something’