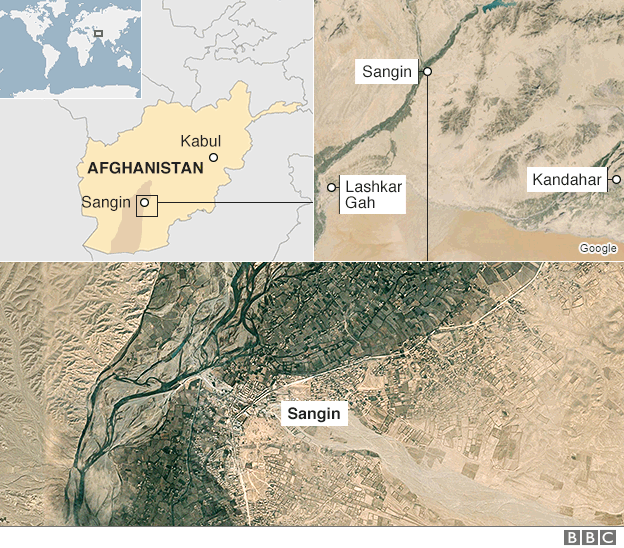 Reports from multiple news sources Thursday claimed the Afghan National Defense and Security Forces in Sangin’s district center were overrun. NATO responded the same day claiming the district was still under Afghan government control and that the withdrawal from the district center was intentional.

“The Afghan government, the ANDSF and the ANP (Afghan National Police) still control Sangin,” said the NATO statement. “The ANDSF, with U.S. support, inflicted heavy casualties on Taliban forces during operations in the district.”

Headquarters Resolute Support statement on #Sangin: "The only thing they left to the Taliban is rubble and dirt" pic.twitter.com/diS4Qt6rQh

NATO claimed the fighting caused the destruction of the center’s infrastructure and that there were no more civilians in the area, prompting a repositioning of the district center and ANP headquarters.

The statement also noted that the U.S. participated in airlift operations to evacuate the area and destroyed the unusable buildings and vehicles left behind.

But not everyone is buying NATO’s claim.

Bill Roggio, a senior fellow at the Foundation for the Defense of Democracies and editor of the Long War Journal, reported on the event and referred to NATO’s characterization as the equivalent of “putting lipstick on a pig.”

“This is the reason the Taliban is winning in Afghanistan,” he added in a tweet.

“That is one of the most un-credible things I have read in the 15 years I’ve covered this war,” Roggio told The Daily Caller News Foundation in an interview.

Sangin is located in Afghanistan’s notorious Helmand province. The district is a known hotbed of Taliban activity and was one of the deadliest combat zones during NATO’s combat mission in Afghanistan; hundreds of U.S. and British Marines were killed or injured defending it from 2001 to 2014. For that reason, Roggio said he believes NATO and the Pentagon wanted to get out ahead of the story.

While the statement denied the Afghan forces were overrun, it did not deny that the Taliban retook what little was left of the district center.

“The ANDSF defended the district center for two months and left on their terms,” said the statement. “The only thing they left the Taliban is rubble and dirt.”

The statement did not offer any other specific details as to why the district center was moved.

Roggio said the conflicting reports on Sangin are further evidence of the decrepit situation in Afghanistan as a whole.

“I can count 100 districts controlled or contested by the Taliban,” he told TheDCNF.

While the Pentagon has tried to present a positive view of Afghanistan, the Office of the Special Inspector General for Afghanistan Reconstruction, otherwise known as SIGAR, reported in October that ANDSF forces were killed in record numbers from January 2016 to Aug. 19, 2016. Approximately 5,523 ANDSF troops were killed, while another 9,665 were injured. At the time, that number was already higher than the estimated 5,000 personnel killed in 2015.

GOP Rep: We Can Say What’s In The Health Care Bill After We Pass It [VIDEO]