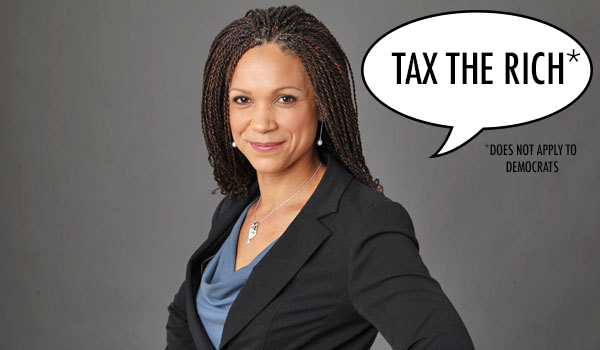 [dropcap size=big]D[/dropcap]emocrats have a long record of being the party that prefers other people do their work for them. Even before the formation of the American Democratic Party, the left has advocated for a “what’s mine is mine and what’s your’s in negotiable” policy. After all, robbing your rich neighbor yourself can be scary, so why not vote to have the state do it? Unfortunately for leftists like George Soros, Al Sharpton, and now Melissa Harris-Perry, the state sees them as rich, too.
//

Melissa Harris-Perry has been in the news a lot for saying ridiculous things. The liberal MSNBC anchor has seen scorn for blaming socialism’s failures on racism and even complaining that the term “hard worker” is offensive. These two blunders are mostly harmless, because anyone with an IQ above that of yogurt knows these statements are completely unfounded.

Much more troubling are her continuous calls for left-totalitarianism and state sponsored robbery of those who have earned. Not only is it ironic that Harris-Perry is one of the elites she wants to soak dry, but according to the internal revenue service, she doesn’t pay her taxes like she wants you to.

The bill dates back to 2013 and runs a hefty fine of seventy thousand dollars. Harris-Perry and her husband say they plan to pay the lien as soon as possible.

The left-wing anchor blames the unpaid bill on a series of personal problems. Sure, if the rest of peasants don’t pay our taxes, we lose our shirts and are hauled off to prison, but if you’re a rich, well-connected MSNBC host, you can owe tens of thousands for years and get away scot-free.

Fight Over Last Piece of Chicken Results in Fatal Stabbing