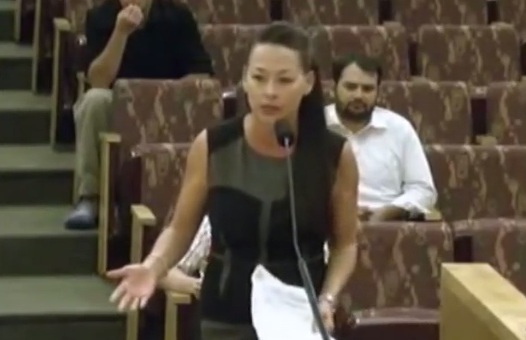 CLARK COUNTY, NV – After waiting eight hours, Daphne Lee was given five minutes at a meeting of the Clark County Commission to speak out against President Obama’s military kidnapping bill, the National Defense Authorization Act. The NDAA allows the military to detain American citizens indefinitely without a trial.

Lee spoke out in favor of the right of due process, begging the local police not to allow federal agents to detain American citizens without due process. Choking back tears, Lee read the provisions which revoked constitutional rights and instituted the laws of war on American soil.

Lee represents a group called PANDA, or the People Against the NDAA. Their mission is as follows:

Our Mission is to nonviolently defeat, strike down, repeal, stop, void and fight the indefinite detention provisions, Sections 1021 and 1022, of the National Defense Authorization Act for the Fiscal Year of 2012, to fight for American civil liberties, to combat laws restricting liberty in the interest of National Security, to support current government officials that are doing so and to engage a younger generation in the politics of the United States so this cannot happen again.

Cops disarmed and arrested a man for open carrying and now they’re going to pay. (VIDEO)

Woman Says Cops Enter Her Home Without Warrant, Stomp Her Parakeet To Death