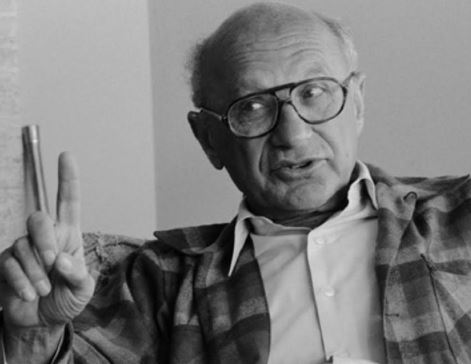 Yesterday was Milton Friedman’s birthday. He was the 1976 Nobel-prize winning economist who promoted free-market ideals and limited government. The Economist called him “the most influential economist of the second half of the 20th century…possibly of all of it.”

He died in 2006, but one of his lasting legacies is EdChoice, formerly the Friedman Foundation for Educational Choice, the organization Friedman and his economist wife, Rose Director Friedman, founded in 1996. The non-profit strives to “advance educational freedom and choice for all as a pathway to successful lives and a stronger society.”

It is fitting that today Friedman is mentioned in The New York Times, but it’s not to offer birthday wishes. Instead, today’s opinion article written by journalist Katherine Stewart, author of The Good News Club: The Christian Right’s Stealth Assault on America’s Children, criticizes Friedman and his current education choice followers.

Stewart alludes to Friedman’s influential 1955 paper advocating education choice and school vouchers for parents. In that paper, Friedman offers the foundation for modern school choice theory. He begins with a statement as true today as it was then:

“The current pause, perhaps reversal, in the trend toward collectivism offers an opportunity to reexamine the existing activities of government and to make a fresh assessment of the activities that are and those that are not justified.”

Friedman goes on to advocate for the “denationalization of education” through choice and vouchers. He writes:

“Given, as at present, that parents can send their children to government schools without special payment, very few can or will send them to other schools unless they too are subsidized. Parochial schools are at a disadvantage in not getting any of the public funds devoted to education; but they have the compensating advantage of being run by institutions that are willing to subsidize them and can raise funds to do so, whereas there are few other sources of subsidies for schools. Let the subsidy be made available to parents regardless where they send their children – provided only that it be to schools that satisfy specified minimum standards – and a wide variety of schools will spring up to meet the demand. Parents could express their views about schools directly, by withdrawing their children from one school and sending them to another, to a much greater extent than is now possible.”

In her op-ed today, entitled “What ‘Government School’ Means,” Stewart writes at length about the term “government schools,” a phrase Friedman used and that many of us use today to describe compulsory, taxpayer-funded, government-controlled schooling. She argues that referring to public schools as “government schools” is rooted in a racist past of “American slavery, Jim Crow-era segregation, anti-Catholic sentiment and a particular form of Christian fundamentalism,” and she attacks the marriage of those advocating economic and religious freedom. Stewart writes:

“Many of Friedman’s successors in the libertarian tradition have forgotten or distanced themselves from the midcentury moment when they formed common cause with the Christian right.”

In its modern usage, as well as Friedman’s use of the term, the phrase “government schooling” is often used to draw attention to increasing federal and state control of education, and the corresponding weakening of parental influence and choice. For instance, in his 1991 Wall Street Journal op-ed, former New York State Teacher of the Year, John Taylor Gatto, writes:

“Government schooling is the most radical adventure in history. It kills the family by monopolizing the best times of childhood and by teaching disrespect for home and parents.”

In her article today, Stewart links compulsory government schooling with democracy. She concludes:

“When these people talk about ‘government schools,’ they want you to think of an alien force, and not an expression of democratic purpose. And when they say ‘freedom,’ they mean freedom from democracy itself.”

But for Friedman and his current school choice followers, freedom from a government-controlled, compulsory institution is a fully democratic expression that widens opportunity and expands liberty. School choice beyond government schools also frees many young people from what can be an oppressive childhood mandate.

As a teacher for 30 years, Gatto saw first-hand the harm that compulsory government schooling can cause. In his Wall Street Journal article he writes:

“Good schools don’t need more money or a longer year; they need real free-market choices, variety that speaks to every need and runs risks. We don’t need a national curriculum or national testing either. Both initiatives arise from ignorance of how people learn or deliberate indifference to it. I can’t teach this way any longer. If you hear of a job where I don’t have to hurt kids to make a living, let me know.”

School choice measures can promote freedom and opportunity, and reduce harm to children. They can also help to limit the role of government while augmenting the role of parents and educators.

Friedman concludes his 1955 paper describing how school choice measures can facilitate freedom. He states that these measures would lead to “a sizable reduction in the direct activities of government, yet a great widening in the educational opportunities open to our children. They would bring a healthy increase in the variety of educational institutions available and in competition among them. Private initiative and enterprise would quicken the pace of progress in this area as it has in so many others. Government would serve its proper function of improving the operation of the invisible hand without substituting the dead hand of bureaucracy.”

This article was first published by the Foundation for Economic Education. Read the original article.

This post Milton Friedman Was Right to Call Them 'Government Schools' was originally published on Intellectual Takeout by Kerry McDonald.