Hundreds of students at the University of Michigan (UM) joined a national campus walkout Wednesday, demanding their school fight racism and serve as a “sanctuary campus” for illegal immigrants.

Ironically, while demonstrating against racism, the protesters engaged in racial segregation themselves by restricting the roles white students were allowed to play in the protest.

Dozens of campuses around the U.S. are holding Wednesday walk-outs in support of illegal immigrants following President-elect Donald Trump’s victory. The protest organized by UM’s Students4Justice group was affiliated with the others, but had a notable quirk: A guideline to the protest explicitly tells white people they aren’t allowed in most protest roles.

The guide, currently posted publicly as a Google Doc, explains where protesters will assemble, suggests what chants to use (those focused on Trump are discouraged, to keep the focus on racism instead of the recent election), and includes a set of roles protesters will have to fill. Organizers warned potential white participants that only a handful of roles would be available to them: Positions such as “demand reader” and “chant coordinator” were exclusively the purview of non-white students. The only posts white students were allowed to fill were “police people” (in charge of “deescalation tactics” to prevent police violence) and “crowd control.”

“We want visibly privileged folx. Let’s protect those around us!” the document said for the crowd control position. “[You are] supposed to be here for support, not to demand or to draw attention.”

The document urges white people to remember that they are there to be “behind” non-white protesters, in a philosophical and potentially literal sense.

In a separate document, Students4Justice laid out the demands it is making of UM’s administration. Like dozens of other campuses around the U.S., it includes a request that UM become a “sanctuary campus” that attempts to protect illegal immigrants. But other demands appeared as well, such as one for the school to purge “white supremacy” by renaming buildings and scholarships that currently honor supporters of eugenics and limited immigration. Another demand calls for the school to divest from companies connected to Israel, and to invest more money in programs dedicated to fighting racism.

Google To Censor “Fake” News By Limiting Their Access To Ads 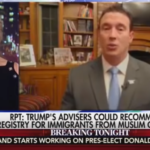