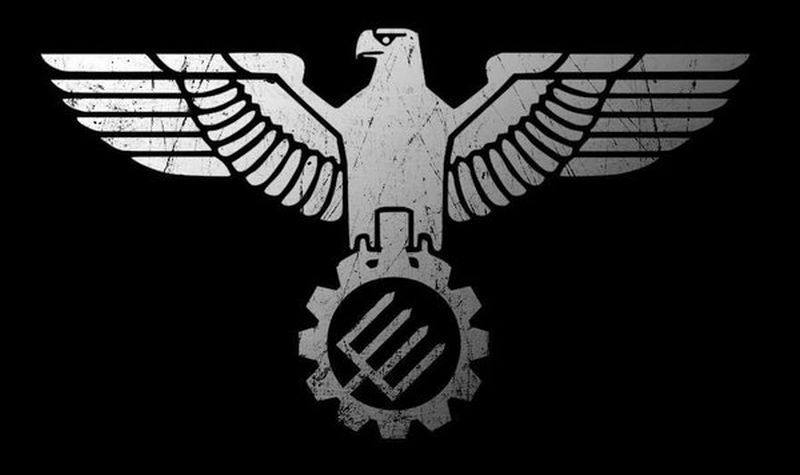 Move over, conservatives. Genuine fascists are in attendance at the Republican National Convention, and they want you to know that they come in peace.

Members of the Traditionalist Worker Party (TWP) attracted news attention two weeks ago, when a rally in Sacramento turned into a big-time brawl. Founder and party chairman Matthew Heimbach has been dubbed “The Little Fuhrer” by the Southern Poverty Law Center. They describe themselves as “defending faith, family, and folk against the politicians and oligarchs who are running America into the ground.”

And now, they’re in Cleveland, both to take part in the spectacle of the Republican National Convention and to show support for Donald Trump. Prior to the convention, the group said it intended to “protect” Trump supporters from potentially violent left-wing protesters. Those protesters haven’t really shown up yet, so on Monday TWP members, dressed up in black garb, could be seen arguing with local eccentrics and debating policy with supporters of run-of-the-mill capitalism.

TWP members will tell you forthrightly that they are national socialists and fascists, but they are certainly not Nazis.

“We are both nationalists and socialists, but not necessarily the German variety,” Heimbach chimed in. “We reject the label of any form of racial hatred … we have contact with comrades in Syria, comrades in the Philippines, comrades around the world and black nationalists in the United States. We believe every group of people should be able to have self-determination.”

DCNF: How long has the party been around?

Heimbach: A little over a year. And we already have our first congressional candidate, Greg Tyler in House District 3 in Tennessee, and we’re running school board candidates and running at the local level. We’ve got chapters from the east coast to the west coast.

DCNF: Is black your color?

H: Of course! It’s a nationalist color. A revolutionary color.

Heimbach: We had a party event in Sacramento two weeks ago in which our guys were attacked by 400 anti-fascists with guns and knives and baseball bats. So it ended up becoming an absolute brawl at the Sacramento statehouse.

These groups are violent. Groups like By Any Means Necessary, which is gonna be here today, the FBI says they’re an actual terrorist organization.

Our message here, especially for white conservatives, is that the enemy hates you just as much as they hate nationalists. So, we’re all kind of on the same side whether you want to be or not, and these groups want to kill you. They’ve attacked Donald Trump supporters, destroyed poverty, so they idea of what we’re seeing is: White America is under attack everywhere, and we’re the party for white Americans.

D: Do you self-describe as fascist?

H: Yeah. It’s a buzzword, but you just gotta roll with it sometimes.

D: You didn’t like the Nazi label, though, for obvious reasons. Are there any historical fascists you do look to for more direct inspiration?

H: Sure. Corneliu Codreanu of the Iron Guard [of Romania]. Jose Antonio of the Spanish Falange. Sir Oswald Mosley of the BUF [British Union of Fascists]. Léon Degrelle of the [Belgian] Rexist Party. And in a modern way, if you look at the end of colonialism in Singapore, they enacted essentially a national socialist government. They even used a take on Mosley’s lightning bolt. And also the Baathists, Bashar al-Assad, formerly Saddam, Colonel Qaddafi.

So we believe that all nationalists are in the fight against globalism. And these policies don’t just work for us. They work for everybody. When you put your people and your nation first, and work with other nationalists against the internationalists, everybody wins.

D: Historically, a lot of fascist parties are tied to a very specific nationhood, like Romanians or Italians. With the United States, you’ve just been referring to whites. What do you view the American nation as?

H: Samuel Huntington, in his famous book Who Are We, asked and grappled with a lot of these questions. If you look, the first immigration law, passed by George Washington, First Congress, limited immigration to white people of good moral character. So even our founders in the very beginning said this was supposed to be a white nation, just based on the immigration rules.

But then Ted Kennedy in 1965 lied, and said the 1965 immigration reform act wouldn’t overturn the system. Of course it ended up doing that. Now, whites are going to be a minority in the next thirty years.

So in the United States, we have a nation that isn’t a nation. It’s a civic empire. And that’s why we see everything breaking down.

D: Why appeal specifically to white nationalism? We have 40 million black people in the United States, and most of them can trace their roots in America back further than white Americans.

H: Well, the idea is that, again, a people is a nation. So what we’re working towards is self-determination. You look at groups like the Nation of Islam, the New Black Panther Party. They want sovereignty and independence. They want black cops for black streets, black schoolteachers for black schools, black lawmakers and black leaders for their communities. We support that. We support all nationalists to be able to have self-determination.

DCNF: How will these nations be carved out?

H: Primarily where demographics are. You look at areas like the American Southwest, of course it would make sense to have a Chicano homeland there, the idea of Atzlan, they’ve been talking about this for decades. They’ve already demographically taken that area. So areas where a population is the majority, they should be allowed to have self-determination.

DCNF: Would there be population exchanges, then, or expulsions?

We don’t need to be expelling everyone. As Pat Buchanan said, a nation needs to be a little over 90 percent of a people to be able to have a coherent culture. We can have some level of diversity, as every nation has, as long as we can control our borders, control who can be a citizen, and have self-determination.

DCNF: What’s the time and place of your rally tonight?

H: It’s gonna be a private rally, because some of the guys, we don’t want to lose their seats.

DCNF: So they’re delegates, but they’re not publicly…?

H: Several white nationalists have already been expelled from being delegates. All I’m gonna say is the RNC didn’t find all of them.

DCNF: What does your family think of your politics?

H: Oh, they hate my politics. Totally estranged. But it’s all right. My wife and I, we came home with a honeymoon baby, and we’re working on number two, so we’re just gonna have a whole softball team worth of family for ourselves. The other idea is, with a party, that we are all family. America is disintegrating, but we can rely on one another as brothers and sisters to be able to resist the system, and be able to help one another. That’s what the heartbeat of a nation is.

Much like the Kurds are building their own nation-state within other nation-states. They’re the largest population group without a nation with the exception of white Americans. We want to follow their model and build a home for our people.

DCNF: Historically, fascist groups have had variable relationships with religion. How does your party view Christianity and other faiths?

H: I myself am a Christian, a lot of our members are Christians, but we have people that aren’t religious, and that are pre-Christian folk religionists. We believe if it’s a traditional European faith, of which Christianity and folk religion would be, that it has a place in our community.

DCNF: Fascism has also historically exalted violence as a means of achieving political change. Blackshirts and all of that. Do you believe in that?

H: I believe that we need to be able to defend ourselves. As we saw in Sacramento, you can take the police’s word for it, not mine: We were attacked by an armed mob of 400, against our activists who were severely outnumbered.

If you look at it, the radical left is increasing its violence, [with] its attacks on cops, for instance. They are attacking us. If you look even at the blackshirts, most of the time there was ever violence was when they were attacked. We believe in self defense. We believe in following the letter of the law, and the spirit, and believe in self-defense for ourselves and our political movement. It’s the radical left that are the violent ones.

DCNF: Can preemptive force be justified?

The RNC’s Platform and Convention Program are Super Nationalist