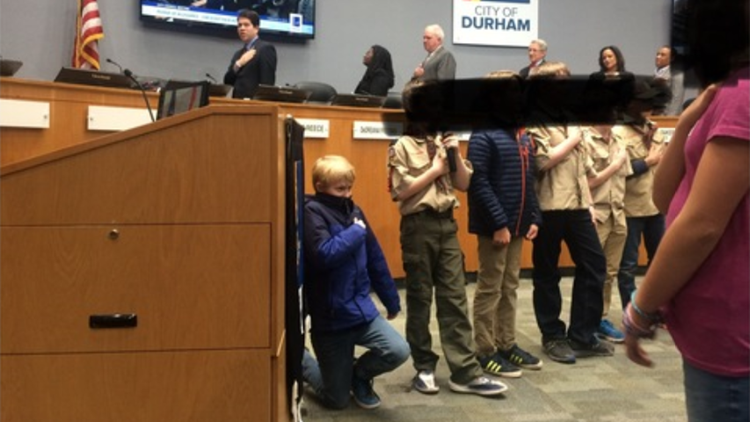 During a recent city council meeting in Durham, NC, 10-year-old Cub S Liam Holmes decided to take a knee during the national anthem – which his troop was there to lead. Not many people noticed, however, Mayor Steve Schewel did. Following the conclusion of the anthem, the mayor had the following to say.

“Thank you, councilman, and thank you, scouts. To the scout that expressed his conscience by kneeling, we will say we endorse and appreciate all expressions of conscience in Durham City Council.”

Holmes said the mayor also thanked him personally after the meeting while speaking with local outlet, CBS 17. When asked about why he took a knee, the ten-year-old said,

“What I did was took a knee against racial discrimination, which is basically when people are mean to other people of different colors.”

His father and local attorney, Scott Holmes, admitted that he discussed this idea with his son prior to the meeting, and was surprised that Liam followed through with it. He added that he was, “also really proud of him.”

Bridging the Divide – A Trump Supporter’s Invitation to Libertarians