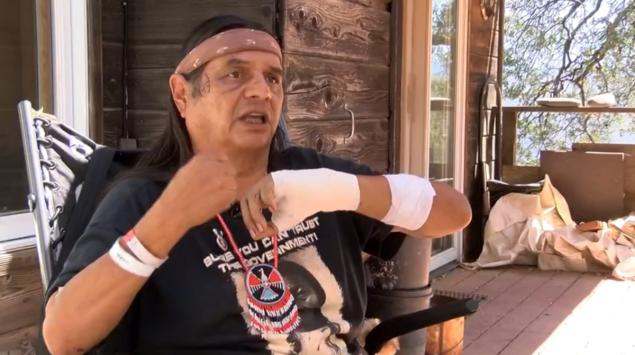 Meet the Marine Corps veteran who is lucky to be alive after fighting off a bear with his bare hands.

Larry Yepez, a 66-year-old veteran who served during the Vietnam War and received a Purple Heart for his service, was attacked Thursday by a 250-pound bear near his home in Mariposa, Calif., CNN reports.

Yepez says he stepped outside of his home Thursday morning at 4 a.m., only to be confronted by a giant bear just 10 feet away. Nothing Yepez yelled at the bear seemed to work. The bear charged and knocked him flat on his back, while it was still dark.

What Yepez described next is chilling.

“I could hear the crunching … when he bit down (on my wrist). He ripped towards my neck and then again the belly,” Yepez told CNN.

In a split second, he knew that the only way out was to fight. He started punching the bear and used both legs to push it off. His dog provided a quick distraction, allowing the two to quickly dash inside the house, while the bear left. With blood pouring from wounds on his neck, face and stomach, Yepez drove himself to the hospital. He returned home Saturday after being treated by hospital staff. The pain was bad the next day, but he said he’s lived through worse.

“I got shot through this wrist, and I got hit here in the foot, and I got some shrapnel metal here in the back,” Yepez said, referring to the injuries he suffered while fighting in Vietnam.

He credits his survival to the training he received during his time in the Marine Corps.

Following the attack, the Mariposa County Sheriff’s Office issued a warning to local residents to keep an eye out for the bear. Residents have reported bears making a mess out of trash cans over the last several weeks. As soon as wildlife officials from the California Department of Fish and Wildlife capture the bear, they plan to euthanize it.

Dear America: Don’t Listen To Bernie Sanders. Sweden’s Not All That Great.