To make your home more inviting to guests, you put down a carpet, clean up, and maybe light up a scented candle; but you wouldn’t take down your family pictures, right? So what do you do if you want to make your church more inviting? Maybe a paint job, mow the grass, put out some coffee and donuts…or you could just remove the cross! At least that’s the idea of one lesbian bishop in Sweden has to make things “more inviting” to the country’s Muslim population.

According to this woman, Eva Brunne, it would be the best way to integrate the swarms of Muslims coming into the country. She stated her reason for the move saying:

Others within her church have noted that churches aren’t simply public places where they can simply change things around in order to appease all people. While the move may have good intentions at its core, Sweden already has a record of bending to far backwards to convenience their rising Muslim population.

Because of the clash of cultures within the country, Muslim men have sought to push Sharia law onto the native Swedes. Due to the untamable intolerance and hatred for non Muslims, Sweden has literally become the rape capital of the world. In a time of desperation and national concern, will the church bow to the growing Islamic invasion of their culture and society? Or will they take a stand and stay strong in their faith in order to help guide the soul of a nation? 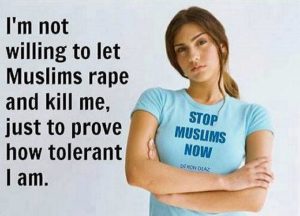 The Luckiest Fools at the Shooting Range