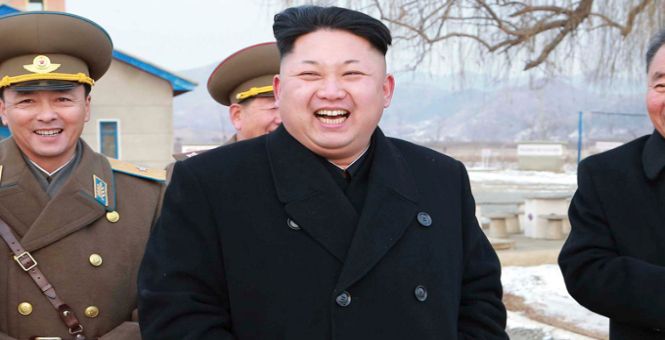 North Korean dictator Kim Jong Un kicked off the new year with a nuclear warning to the U.S.

The young despot announced that all of the U.S. mainland is in range, asserting that he has a button to order a nuclear strike against the U.S. installed on his office desk, according to Yonhap News Agency.

“The entire United States is within range of our nuclear weapons, and a nuclear button is always on my desk. This is reality, not a threat,” Kim explained, asserting that the U.S. would not dare start a war with the North now that the rogue state has finally achieved its nuclear ambitions.

“We have secured powerful deterrence against the nuclear threat from the U.S.,” he added.

North Korea found new ways to threaten its neighbors in 2017, as well as those enemies located farther from its shores. The rogue state successfully tested five never-before-seen ballistic missiles, including two new intercontinental ballistic missiles believed to be capable of striking the continental U.S.

In the year ahead, Kim stressed, the North will focus on operational deployment of the country’s new ballistic missiles and nuclear bombs. The North Korean leader called for the mass production of nuclear weapons and missiles. He also instructed his forces to rapidly put these weapons into service.

Kim, however, made it clear that North Korea will only use its nuclear weapons if threatened.

Moving away from talk of war, the young dictator expressed an interest in improved inter-Korean relations, announcing that not only will North Korea participate in the 2018 Winter Olympics in Pyeongchang, but Pyongyang is apparently interested in talks with Seoul.

The start of the new year was initially marked with fireworks and other festive celebrations in the North Korean capital.