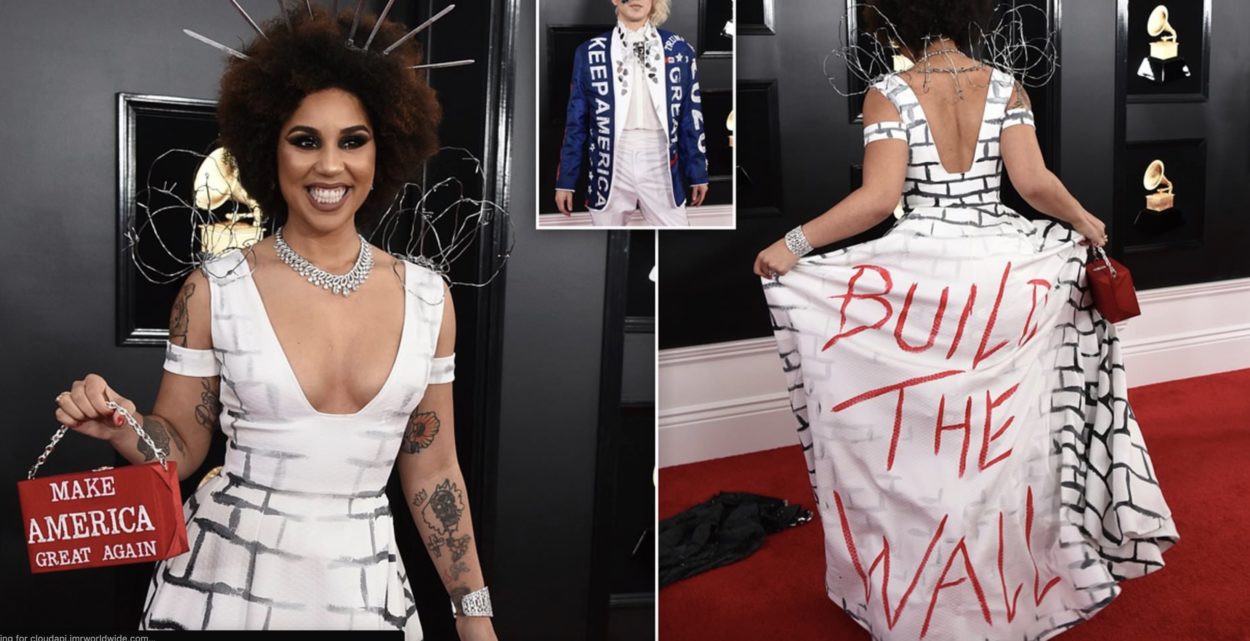 Joy Villa, the singer who made headlines for her pro-Trump and pro-life dresses at the past two Grammy Awards Shows has made headlines again at this year’s Grammy’s for another politically inspired gown.

Joy showed up at the awards show wearing a black-and-white gown with a brick pattern inspired by Pink Floyd’s 1979 album “The Wall” with the words “Build the Wall” hand-painted in red on the back side.

The dress was designed by L.A.-based Desi Lee Allinger-Nelson of Desi Designs Couture, it also featured barbed wire on the shoulders to mimic the top of a security fence, a spiky headpiece, and a silver cloak-like dress over that top that alludes to steel. Villa also carried a red purse featuring the words “Make America Great Again” made to mimic the design of a MAGA hat.

“I’m all for stronger border security,” says Villa. “Obama and Clinton and Bush talked about that, but President Trump’s the first one to promise that he’ll get it done. It’s pro-America, pro-protection.”

“When Trump came in the picture, at first I hated him,” Villa said. “All my music friends hated him and wanted Bernie. I thought ‘Bernie looks good; he seems like a cool dude.’ To me, the Republicans weren’t cool. And Trump ended up becoming so obnoxious and so in our face. I was living outside of the U.S. and I came back in 2016 and I thought,’ ‘I’ve got to check this guy out.’ If you had asked me, I would have said, ‘Yeah, I’m a Democrat’ and I was a registered Independent. I was raised conservative, but I became more liberal for a while and I voted for Obama. I was anti-Hillary because what she stands for is against women, in my opinion. But I was very conservative in my heart. I wanted less government and less taxes.”

Villa said she developed an interest in Donald Trump after doing research on his positions, listening to his speeches and interviews, including an interview he did with Oprah in 1989. She says it was then that she started to agree with his political views “against better judgment” and decided to vote for him. “I was a secret Trumper for months,” she says. “When I decided to wear the Trump dress, I figured that most people would try to ignore me, they’d be so upset. But the rebel in me was like, ‘I have to come out and support the president.”

Last year, Villa wore a provocative pro-life ensemble featuring a graphic image of a fetus. She paired the white Pronovias bridal gown, emblazoned with a red fetus encircled by rainbow hues that Villa hand-painted herself, with a tiara, and her handbag was inscribed with the words “Choose Life.” Villa says, “I really wanted to express my personal values again and come out strong and say what I feel and that’s that I’m pro-life.”

Villa also caused quite a stir in 2017 when she stepped out in a dress featuring President Trump’s campaign slogan, “Make America Great Again,” with “Trump” stamped on the train, designed by Filipino immigrant Andre Soriano. That gained Villa “over 626 million Google searches,” she says, also noting that she has received death threats and rape threats on social media.

“I grew up in theater, so I’ve always used costume as a way to express myself,” Villa said. “It’s an opportunity to show the world who I am on the red carpet, which to me is the same as a stage. I approach it as a show. I want to ‘wow’ people. My heroes on the red carpet have always been Cher, Madonna, the wild ones; the worst dressed. Or Lady Gaga with the meat dress. Who even talks about the best dressed? No one even remembers who was best-dressed last year!”

Villa’s dress has drummed up quite a bit of attention both from supporters and opposition who have been vocal about their thoughts on her political statement.