Biden leads Trump by 9.1 points nationally, according to FiveThirtyEight, down about one point since the story was published on Oct. 14. The Post’s report alleged that Hunter Biden introduced his father to an executive at Burisma Holdings before Biden, as vice president, pressured Ukrainian officials into firing a prosecutor investigating the company.

Though some of Biden’s critics have asserted that the report shows that Biden attempted to use his position to help his son financially, Biden pressured Ukrainian officials to remove the prosecutor, Viktor Shokin, because he had refused to investigate corruption among Ukrainian politicians, according to a USA Today fact check.

Other emails and texts that have surfaced show Hunter appearing to leverage his family name to score lucrative foreign business deals.

In Wisconsin, Michigan and Pennsylvania, the three states that some forecasters believe are Biden’s best chances to winning the election on Nov. 3, the former vice president leads by 6.6 points, 7.6 points and 5.7 points, respectively. Biden led in each state by 7.8 points, 7.9 points and 7.1 points on Oct. 14, according to FiveThirtyEight.

Though the current numbers are relatively better for Trump, who has consistently trailed Biden both nationally and in most battleground states that he won in 2016, his relative gains are due to older polls being dropped from polling averages, says Nate Silver, FiveThirtyEight’s editor-in-chief. 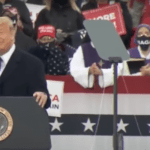 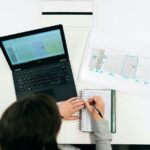