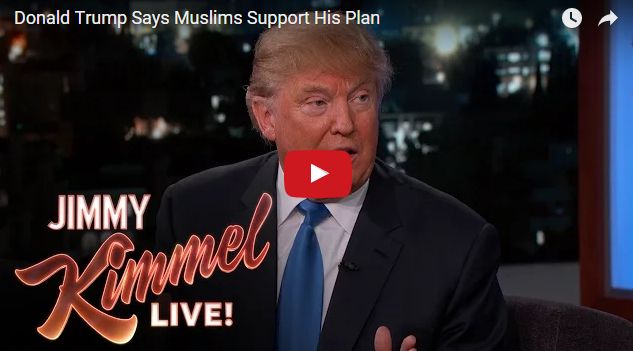 Jimmy Kimmel hit at Donald Trump’s proposed ban on Muslims during his show on Wednesday for not representing American values.

“Did anyone try to talk you out of saying we should temporarily ban Muslims from entering the United States?” Kimmel asked the GOP presidential front-runner on ABC’s “Jimmy Kimmel Live!”

“Isn’t it un-American and wrong to discriminate against people based on their religion?” he asked.

“The word is temporarily,” Trump responded. “We have people looking to come into our country and do tremendous harm. We’ve got to get to the bottom of it. There’s some bad stuff going on.”

Trump then said that his proposal has support within the Islamic community.

“I have many, many friends who are Muslims,” he said. “They’re great people. Many of them have called me and said, ‘you know Donald, you’re right, we do have a problem.’ ”

“Those may have been crank calls,” Kimmel joked as the audience applauded and laughed. “Did you check the caller ID?”