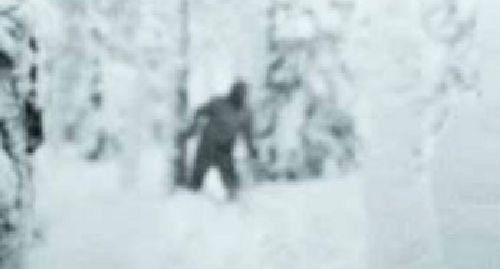 On Monday, the Indian Army claimed that they discovered tracks from the mythical Himalayan snow beast known as a Yeti at one of their bases in the Himalayan mountains. They posted pictures of the alleged tracks on their Twitter account.

“For the first time, an #IndianArmy Moutaineering Expedition Team has sited Mysterious Footprints of mythical beast ‘Yeti’ measuring 32×15 inches close to Makalu Base Camp on 09 April 2019. This elusive snowman has only been sighted at Makalu-Barun National Park in the past.”

For the first time, an #IndianArmy Moutaineering Expedition Team has sited Mysterious Footprints of mythical beast 'Yeti' measuring 32×15 inches close to Makalu Base Camp on 09 April 2019. This elusive snowman has only been sighted at Makalu-Barun National Park in the past. pic.twitter.com/AMD4MYIgV7

The Yeti, a creature similar to the mythical Sasquatch, is said to live in the mountains of Tibet according to Nepalese legend. Many people, including Western explorers and adventurers, have claimed to have encountered the creature. Some have even claimed to have retrieved physical evidence of the Yeti such as fur, a scalp, or hand; but after scientific analysis, it was determined that it wasn’t a Yeti, but rather some sort misclassified Himalayan wildlife – mostly bears. However, the alleged encounters have contributed to the spread of the local legend.

The claims made by the Indian Army stirred up some humorous responses, although not everyone was amused.

This is deeply, deeply embarrassing: whoever in the Indian Army’s PR has circulated this is disgracing the institution, and India, in the world’s eyes. https://t.co/f11OvolnUb

I always knew Tintin was right. He was the first to spot the mysterious beast Yeti. Time to re-read Tintin In Tibet pic.twitter.com/mEBdxhqTVx

Tintin in Tibet ..was right all this while!

Excellent work! When u find hippogriffs, pls don't forget to bow before u approach. Remember what happened to Draco in Harry Potter and the prisoner of Azkaban

or it could be a catwalk! pic.twitter.com/fvKg2w6wN3

He entered in city for voting pic.twitter.com/8QQRr5NBIR

#Yeti #catwalk is self explanatory and people think that single leg #YetiFootprints found by #IndianArmy is fake! So insulting. pic.twitter.com/AH8Vcsm47p

Finding yeti is like finding the address of all the promises that our politicians make before elections. India vote wisely or look for footprints for the next 5 years.

Congratulations, we are always proud of you. salutes to the #IndianArmy Moutaineering Expedition Team. But please, you are Indian, dont call Yeti as beast. Show respect for them. If you say he is a 'snowman'.

I’m looking forward to the Indian Navy’s official handle tweeting about having found the Loch Ness Monster, and a former BJP MP ticking them off for using the un-Indian word “monster.” pic.twitter.com/pXgciqMzmQ

Daniel C. Taylor, author of “Yeti: The Ecology of a Mystery,” argued that the footprints were probably those of multiple bears, instead of a singular creature.

“If that is the footprint of an animal or a single animal, it’s the size of a dinosaur,” Taylor told Reuters.

“One needs to really confirm those measurements of the footprint size because we know for sure that there are no dinosaurs living in the Barun valley,” he added according to The Daily Caller.

Since the people at Jack Links Beef Jerky have discovered the Sasquatch, and the Indian Army is now hot on the trail of the Yeti, one can only wonder if maybe if Scots might soon find the Loch Ness Monster? Or perhaps we can find that mythical kingdom Bernie Sanders talks about so much where Socialism actually creates a prosperous society.