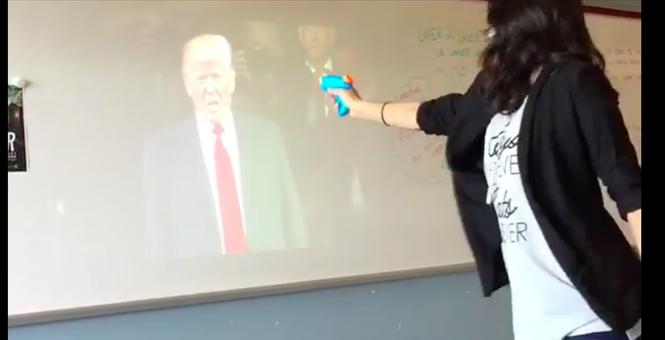 A high school art teacher has landed herself in extremely hot water after she posted an Instagram video depicting her “shooting” an image of Donald Trump with a squirt gun and screaming “die” during Friday’s inauguration.

The video went viral on Twitter before the original source could be found.

Mentally ill teacher shoots Trump with a squirt gun in front of her students. This woman should be fired. pic.twitter.com/Gr0g7RKohD

The teacher has since deleted the video, but copies still remain on the internet.

The video was captioned with “Watching the #inauguration in my classroom like…. #no #stop #denial #squirtgun #hypocrisy #powerless #saveusall #teachthembetter #atleastitsfriday”.

TownHall is reporting that it is unknown if students were in the classroom, or who took the footage.

The Gateway Pundit has said that the Secret Service is aware of the video, which was posted on the teacher’s personal Instagram account.

While the video is not a shocking reaction toward the election of Donald Trump based off of other reactions from teachers, students, or the “safe space” left, that doesn’t mean it should be ignored. The behavior from this teacher (whether or not students were present) and others, is downright inappropriate. Teachers are supposed to be the bastion of critical thinking, helping the next generation of thinkers to develop, process, and handle contentious conversation and alternative thought. Instead, we see a trend of vitriol, unsettledness, and delicate “snowflake” mentalities who lose their minds at the very idea that their opinions don’t dictate reality.

Regardless of your opinion of Trump, videos, reactions, and anti-intellectual thought processes such as these are and have been counter-productive to society as a whole.