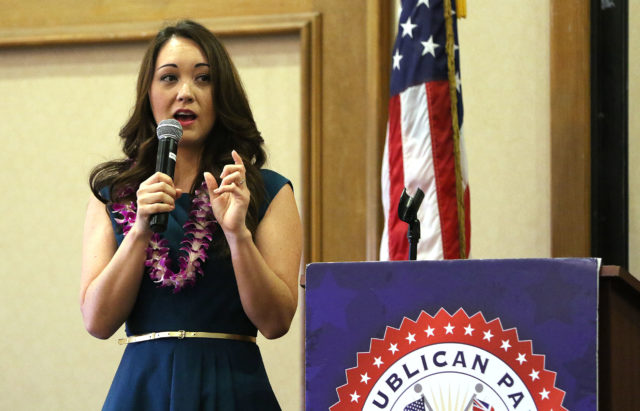 Hawaii Rep. Beth Fukumoto officially resigned her membership with the Republican Party Wednesday, according to a report from Reuters.

Fukumoto was previously the minority leader in the Hawaii statehouse, but was ousted from that position in February after she participated in the Women’s March on Washington, according to NPR.

Fukumoto reported that party leaders ordered her to stop her open opposition to President Donald Trump if she was to remain the most powerful Republican in the state’s legislature, an offer she refused.

“I’m being removed because I refused to make that commitment, because I believe it’s our job as Americans and as leaders in this body to criticize power when power is wrong,” Fukumoto said on the chamber floor in February.

Fukumoto officially changed her status Wednesday, citing her strong and continued opposition to Trump as the motivation for the change. She’s an independent while she “applies” for membership to the Democratic Party.

“This election, I saw members of my party marginalizing and condemning minorities, ethnic or otherwise, and making demeaning comments towards women,” she wrote in an open letter to the Republican Party.

“I wanted very badly to see the Republican Party denounce his comments, and that didn’t happen,” she told Reuters.

“That for me was the issue that really changed how I felt.”

Fukumoto ran unopposed in the 2016 primary, and handily beat her Democratic opponent with 67.5 percent of the vote. She’s been a sitting member of the state House of Representatives since 2012.

Princeton Yanks Award From Accomplished Theologian Over His Views On Gender, Gays