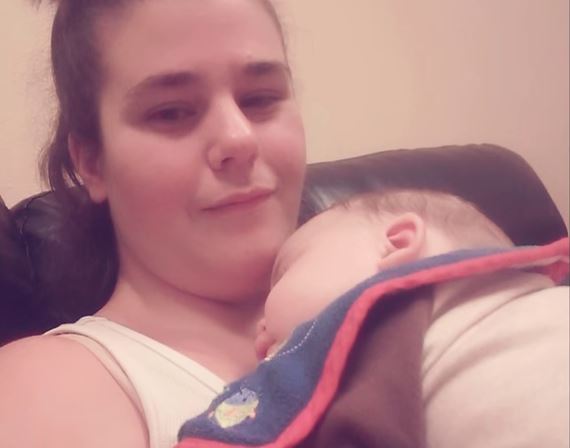 Amy Fabbrini and Eric Ziegler of Redmond, Oregon, did something this Christmas that many parents take for granted: they celebrated it with their child.

The couple’s 10-month-old son Hunter had been in foster care almost since the day he was born. But last week, The Oregonian reports, a judge declared that the state had not proven that it was in Hunter’s best interests to remain under the care of the Oregon Department of Human Services.

Ziegler and Fabbrini have not been accused of abuse or neglect. They have been deemed unfit because state authorities have declared their IQs insufficient.

A typical IQ is around 100. Fabbrini’s is 72; Ziegler’s is 66. For this, their children were taken from them, sparking a legal battle that has stretched some four years.

Samantha Swindler, a reporter for The Oregonian, said that the state, armed with three attorneys and vast resources, called some 40 witnesses at the trial, which spanned 11 days.

In addition to psychologists called upon to testify that Fabbrini and Ziegler are not smart enough to safely raise children, the state called experts to highlight general deficiencies in their parenting and living environment. Their home smelled funny (like dog). The snacks they ate were not very healthy. The couple blew bubbles with their children instead of reading to them.

“It feels like we have to go through so many loops to prove to them we’re capable of taking care of our kids,” said Fabbrini, noting that the couple has taken multiple parenting and nutritional classes. “There’s always one more thing.”

“They can’t win for losing,” Flint said, noting that the state appeared to be using Ziegler and Fabbrini’s efforts to cooperate as evidence they were unfit.

Still, Flint did not return the couple’s other child into their custody, noting that he has been diagnosed with certain developmental hurdles.

Ziegler and Fabbrini’s story might sound extraordinary, but in some ways it is not that unique.

Earlier this year, the New York Times published an article detailing the rise in cases involving children removed from homes by child services agencies. In many cases, particularly in poor and urban communities, children are plucked from homes on grounds that a child’s welfare is in danger, claims that often are backed up with little evidence. The phenomenon is apparently so common among black and Latina women that it spawned a nickname: Jane Crow.

Lucky parents get their children returned in a month or so, after the state has determined the child is actually not in danger. (By then, of course, parents have been put through a process that includes hearings, court proceedings, and attorneys appointed or hired.)

Vivek S. Sankaran, a professor at the University of Michigan Law School who specializes in short-term child displacement matters, told the Times there were 25,000 such cases nationwide in 2013. A child is removed form a home, placed in foster care, then returned less than 30 days later.

Sankaran said families are left to deal with the consequences of these abrupt removals, and they often are severe.

“An expansive body of research tells us these children likely experienced significant trauma as a result of their removal to foster care, trauma that may haunt them for the rest of their lives,” he wrote in a 2016 paper.

Removing children from homes is serious business. It might be time to revisit the byzantine manner in which it’s being done in many states.

Ziegler and Fabbrini’s case in particular appears cold, wasteful, and dangerous. These are two people, after all, who only wish to raise the children they love.

“How much heartache could have been avoided if the state had opted to, say, provide a parenting aide to coach them rather than a case worker to criticize them?” Swindler asks. “The cost to the state, the cost to these children and the pain for both the biological and foster families might have been mitigated.”

This post Have a Low IQ? The Government Can Take Your Child. was originally published on Intellectual Takeout by Jon Miltimore.