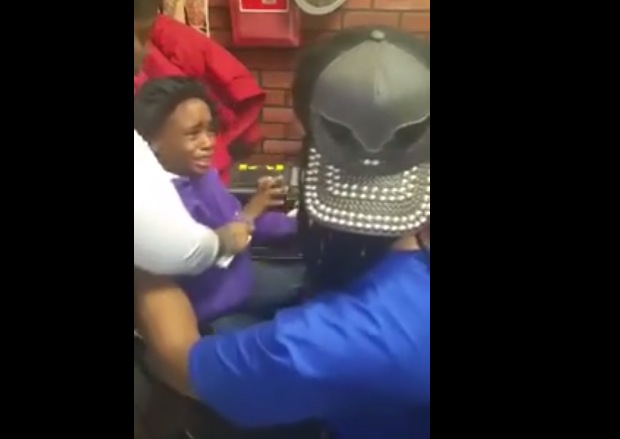 A video is going viral of a mother forcefully having her daughter’s ears pierced.

CHICAGO, IL – Should it be a girl’s choice to get her ear’s pierced? A pushy mom at a Chicago ear piercing establishment is going viral after a video hit Facebook. She caught on camera putting the little girl in a choke-hold. The little girl screams for her to stop. Now, some are wondering if the mother went too far. The piercer, Pretty Ricky, posted the video with this description, “This lil girl nearly lost her dammm mind when I was trying to Pierce her ears yall gotta watch this till the end.” This is a rough transcript of the video:

A man off camera can be heard saying, “You’re supposed to be a big girl.”

“You stay just like that. You put your hand up there and I’m going to punch you.” says her mom.

The girl pleads with people at the ear piercing establishment to stop. She cries out, “Ok, ok ok, ok.”

“Now, squeeze your legs. We’re going to count to five; we’re going to give you five. One, put your hands down. Two, Three, calm down. Four, he’s going to get ready to do it, OK. Calm down. Five, hold on tight.” says her mom.

“He is a professional,”said her mother. She reassures her daughter that she could file a lawsuit if the piercer harms her.

“Me beating your ass with my fist will hurt worse.” said her mom. “I thought so, lets get this over with.”

The mother then puts her daughter into a choke hold at this point.

“Ricky, go ahead and do it while she got her,” said a man off camera.

The woman then puts the girl in a tighter hold. She starts crying hysterically. The piercer does the job and the girl sobs while her mother and people in the room belittle her.

“You’re acting like a little baby.” said the man.

“Now she feels stupid as hell.” says her mother. “That didn’t hurt at all, right? We’re going to stay and get the other one done.”

Woman Dies After Having Too Many Illegal Butt Injections