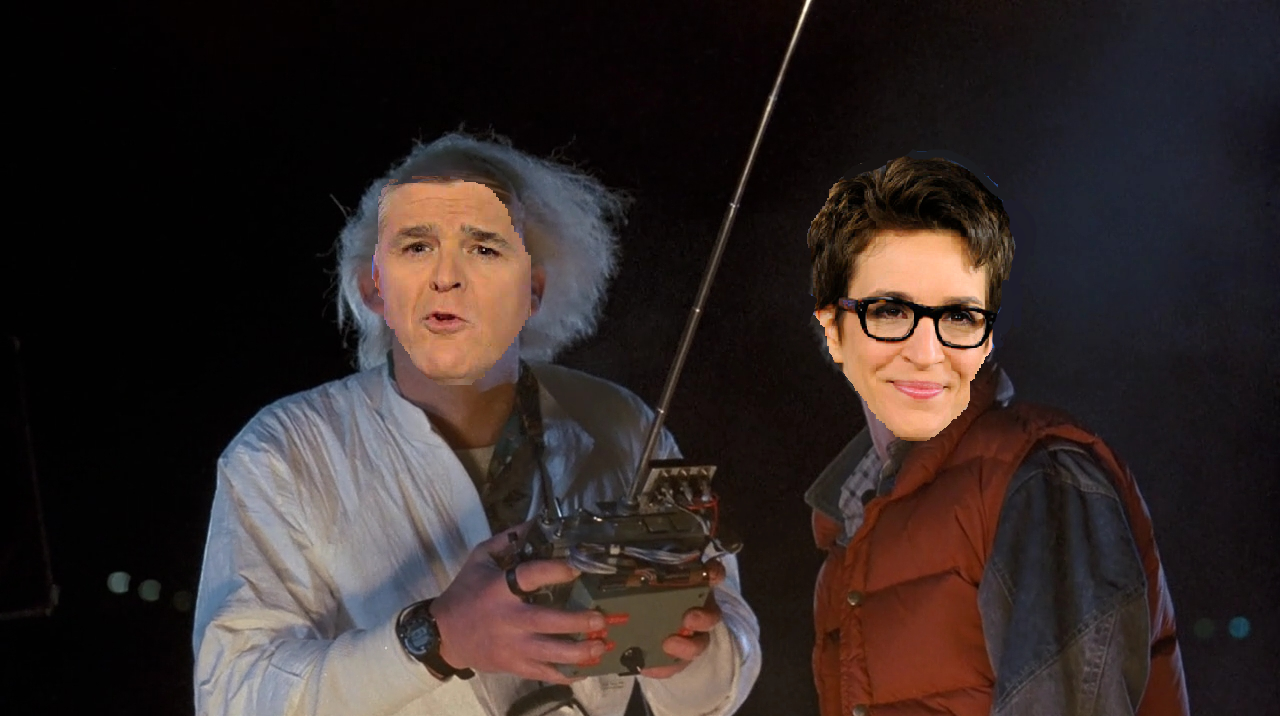 On late Friday afternoon, members of the Fox News and MSNBC media networks convened to discuss an ongoing mutual conundrum which they had. After eight years of taking particular (extremely principled) positions, they were at a crossroads. “We’ve spent all of our time criticizing executive power!” shouted Lou Dobbs of Fox News. Lawrence O’Donnell of MSNBC retorted “And we’ve been making excuses as to why the ongoing wars are justifiable!”

They quietly came to a realization. Chris Matthews butted in, “I guess we have to just own it and continue giving the benefit of the doubt to Donald Trump the same way we did for Barack Obama.” He shuddered. Just then, a miracle occurred. Sean Hannity, raising his pointer finger, exclaimed, “Or…or we could build a DeLorean DMC-12 to go back to when our positions were opposite!” Rachel Maddow slowly responded, “That idea is just crazy enough… to work.”

Quickly, the crew got to work. After hours of intense laboring, they were complete. Hannity and Maddow jumped in the DeLorean together and soon found themselves on the set of Hannity & Colmes in mid-2005. The country had just concluded a divisive election. The current-day Hannity looked on as past Alan Colmes pleaded with past Hannity: “Can’t we just think of civil liberties? The PATRIOT Act could be used against anyone…even conservatives.”

The modern Hannity watched his younger self eloquently retort. “WHAT ARE YOU TALKING ABOUT, YOU PINKO COMMIE?! DO YOU HATE AMERICA?! DO YOU WANT THE TERRORISTS TO WIN?!” The current-day Hannity grinned, “Wow. That young guy has a point. I can’t believe I forgot that over the past 8 years.”

Hannity and Maddow soon continued to the set of MSNBC, where a young and unproven Maddow was testing her voice as a regular panelist on the MSNBC Show Tucker. As the host, conservative Tucker Carlson, explained President Bush was within his rights to use his executive power, a younger Maddow calmly answered, “NO! AN ENCROACHING EXECUTIVE IS DANGEROUS AND MUST BE CALLED OUT! HE’S NOT MY PRESIDENT!” The current Maddow couldn’t believe her ears. “That makes the most sense of anything I’ve ever heard. How did I miss that?”

Quickly huddling those past versions of themselves into their DeLorean, Hannity and Maddow knew that they were doing the right thing. They planned to use these “throwbacks” to slowly intoxicate their respective staffs with their “newfound” knowledge. “Not only do we get to still be right, we never have to admit that we’re wrong!” Just as they high-fived, they set their return time for January 20, 2017.

Not Just Harmless SJWs: Meet the Mirror Image of the Alt-Right

No, This is Not Blackface: Supposed “Racist” Photo Explained