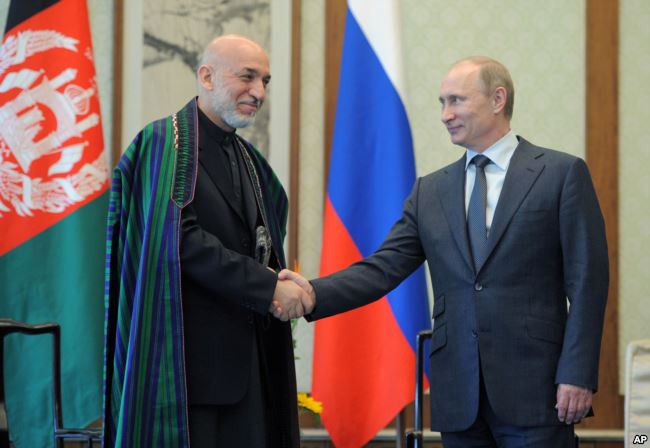 Former Afghanistan President Hamid Karzai claimed Wednesday that the Islamic State militant group (ISIS) was a tool of the U.S. Karzai, a former ally to Washington who has become increasingly critical of U.S. foreign policy, said America’s’ two-year fight against ISIS has been “weak,” reports Newsweek.

Speaking to Voice of America’s (VOA) Afghan Service, Karzai criticized a recent U.S. attack on ISIS in Afghanistan. On April 13, the U.S. dropped the largest ever non-nuclear weapon —known as the mother of all bombs—on an ISIS stronghold in the country’s east. Karzai said the attack, which he condemned at the time, failed to eliminate the group. (The assault killed 95 ISIS militants), explained Newsweek.

“I consider Daesh [the U.S.’] tool,” Karzai went onto say, using the Arabic acronym for the Islamic State, explained Newsweek. “I do not differentiate at all between Daesh and America.”

The U.S. is currently battling ISIS in Afghanistan, along with NATO forces and local troops. Washington had promised to defeat the the group by the end of the year, while combined military efforts have already cut the number of districts ISIS holds from more than 10 to between three and five. (Afghanistan is split into 398 districts), reports Newsweek.

Karzai, who used to work closely with the U.S. during his time as the Afghan president, has become increasingly critical. He has accused the U.S. of sharing a common goal with the Taliban to destabilize Afghanistan. And in 2014, he refused to meet with then-President Barack Obama at a Bagram military base during a surprise visit with troops.

Karzai seems to be lending his support to another country: Russia. During his VOA interview, he brushed away claims—made by the U.S. and rights groups—that Russia has been assisting the Taliban in Afghanistan. Moscow, which supports including the militants in peace talks, says it has never armed the group, but it has communicated with them, says Newsweek.

Karzai was also scathing of the U.S.’ refusal to attend Moscow-brokered talks last week on the future of Afghanistan, telling VOA that Washington is not sincere about bringing peace to the country. The U.S. had declined to attend the summit, the third of its kind, saying that Russia’s motives were unclear, concluded Newsweek.

EDITOR’S NOTE: This story is a reporting of comments pertinent to global foreign policy, it is not a representation of the author or The Libertarian Republic.