Self-proclaimed “feminist” and celebrator of abortions, Gloria Steinem took to an interview with Refinery29 last Tuesday, to attempt to connect climate change and how it can be directly correlated to a lack of abortions. 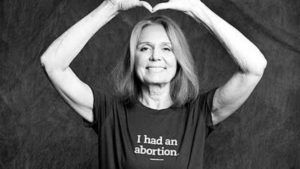 The 83-year-old Steinem who helped popularize the controversial “I got an abortion” T-shirt, told the website that climate change is a “feminist issue” because world overpopulation could have been avoided if abortions were more readily accessible to women, the Blaze reported.

“Listen, what causes climate deprivation is population,” she said. “If we had not been systematically forcing women to have children they don’t want or can’t care for over the 500 years of patriarchy, we wouldn’t have the climate problems that we have. That’s the fundamental cause of climate change. Even if the Vatican doesn’t tell us that. In addition to that, because women are the major agricultural workers in the world, and also the carriers of water and the feeders of families and so on, it’s a disproportionate burden.”

‘Get Me Roger Stone’ Gets High Marks

Prof Receives Over $200,000 To Study Microaggressions