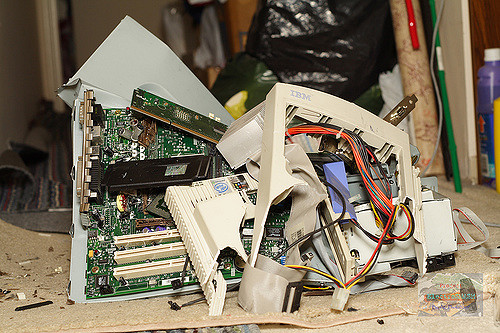 FBI agents seized smashed computer hard drives from the home of Florida Democratic Rep. Debbie Wasserman Schultz’s information technology (IT) administrator, according to an individual who was interviewed by Bureau investigators in the case and a high level congressional source.

Pakistani-born Imran Awan, long-time right-hand IT aide to the former Democratic National Committee (DNC) Chairwoman, has since desperately tried to get the hard drives back, the individual told The Daily Caller News Foundation’s Investigative Group.

The congressional source, speaking on condition of anonymity because of the sensitivity of the probe, confirmed that the FBI has joined what Politico previously described as a Capitol Police criminal probe into “serious, potentially illegal, violations on the House IT network” by Imran and three of his relatives, who had access to the emails and files of the more than two dozen House Democrats who employed them on a part-time basis.

Awan’s younger brothers, Abid and Jamal, his wife, Hina Alvi, and Rao Abbas, Imran’s best friend, are also under investigation. There have been no arrests in the case.

There is also evidence of financial schemes that extend beyond the Capitol Police’s purview and may expand to Pakistan, where Imran spends significant portions of the year.

Speaker of the House Paul Ryan said in March that the Capitol Police are “getting the kind of technical assistance they need to do that. This is under an active criminal investigation, their capabilities are pretty strong but, they’re also able to go and get the kind of help they need from other sources.”

The brothers’ stepmother independently filed court documents in Virginia accusing the brothers of wiretapping and extorting her.

Soon after Imran began working for Wasserman Schultz in 2005, his two brothers and two of their wives — plus Abbas and another friend — began appearing as IT staffers on the payrolls of other House Democrats. Collectively, the Awan group has been paid $4 million since 2009.

Fellow IT staffers interviewed by TheDCNF said the Awans were often absent from weekly meetings and email exchanges. One of the fellow staffers said some of the computers the Awans managed were being used to transfer data to an off-site server.

Shortly after the criminal probe was revealed in February, Imran abruptly moved out of his longtime home on Hawkshead Drive in Lorton, Va., and listed it for rent on a website that connects landlords with military families.

One of new tenants — a Marine Corps veteran married to a female Navy Officer — said he found “wireless routers, hard drives that look like they tried to destroy, laptops, [and] a lot of brand new expensive toner.”

The tenants called the Naval Criminal Investigative Service, and not long after, FBI agents arrived together with the Capitol Police to interview them and confiscate the equipment. The Marine spoke on condition of anonymity because of concerns for his wife’s naval career, saying she doesn’t want to be associated with a national security incident.

“It was in the garage. They recycled cabinets and lined them along the walls. They left in a huge hurry,” the Marine said. “It looks like government-issued equipment. We turned that stuff over.”

Wasserman Schultz resigned as DNC chief in July 2016 after the committee’s IT system was hacked. She has since refused to fire Imran despite learning that he is a target of a criminal investigation.

The Marine said Imran wanted the hard drives back so desperately that he threatened to sue the renter for stealing them.

“It was unbelievable. I don’t know where they get off thinking they’re going to sue us for items we have no obligation to hold onto,” he said.

Imran came to the house for the items “three to four times,” but the Marine wouldn’t let him enter.

“Their lawyer contacted us today via email and said we owed $350 in late charges and the items he left in the house,” the Marine said.

The Marine heard about the House investigation on the radio, and by that time, he had noticed other bizarre signs of desperation from his landlord.

“When we first moved in, a mailman came with certified mail from the House of Representatives. We were trying to be nice and signed for it. They lost their shit, saying ‘why did you sign for it, this is illegal!’ It was certified from the [Chief Administrative Officer of the House],” he said.

“The postman came a second time with a certified letter and I called Imran on the spot, asking ‘what do you want me to do.’” He said ‘just send him away, I’m homeless.’ They refused to forward their mail.”

Imran’s brother Abid has also been evasive about his location, failing to provide an accurate address for delivery of court materials in a lawsuit in which he is accused of defrauding the brothers’ stepmother. Imran’s wife, Hina, has traveled to Pakistan since the probe was revealed, according to neighbors.

Wasserman Schultz has demanded return of a laptop seized by the Capitol Police because it was purportedly used by Imran and was found hidden in a vacant office. The Florida Democrat used a Capitol Police budget hearing to threaten “consequences” for them if the laptop wasn’t returned.

On Thursday it was reported that police have not examined its contents because of the invocation of the Constitution’s “Speech and Debate clause,” and after months of refusal, her lawyer is now “negotiating” access to the data on yet-to-be-determined terms.

Members have been unusually mum about the apparent cybersecurity breach, especially given the pattern of cyberattacks on other government and political institutions.

The Marine expressed disgust with the muted reaction, saying “I served in the Marine Corps for 14 years; if I downloaded files to an offsite server, I’m going to prison for a lot of years.”

He implied he’s a Democrat but said when it comes to national security “political ideology doesn’t matter.”

He believes “there’s no way they could get this far without help” from some of the Democratic members of Congress for whom the brothers worked. Other Democrats have ignored a major security breach because it could look like a “black eye” in that they failed to vet the Pakistanis, he said.

“He’s dangerous. This is a crime syndicate that has successfully indicated Congress,” he said.

“If Donald Trump and the Republicans had hired foreign nationals to be their top IT guys and somehow their congressional files had been compromised, this would have been all over the news.” he continued.

A Bureau spokesman said the “FBI does not have anything to provide on this and I will still have to refer you to [Capitol Police] for any public comment.”

‘So Many Questions’: Opponent Calls Out Wasserman Schultz Over Arrest Of IT Aide