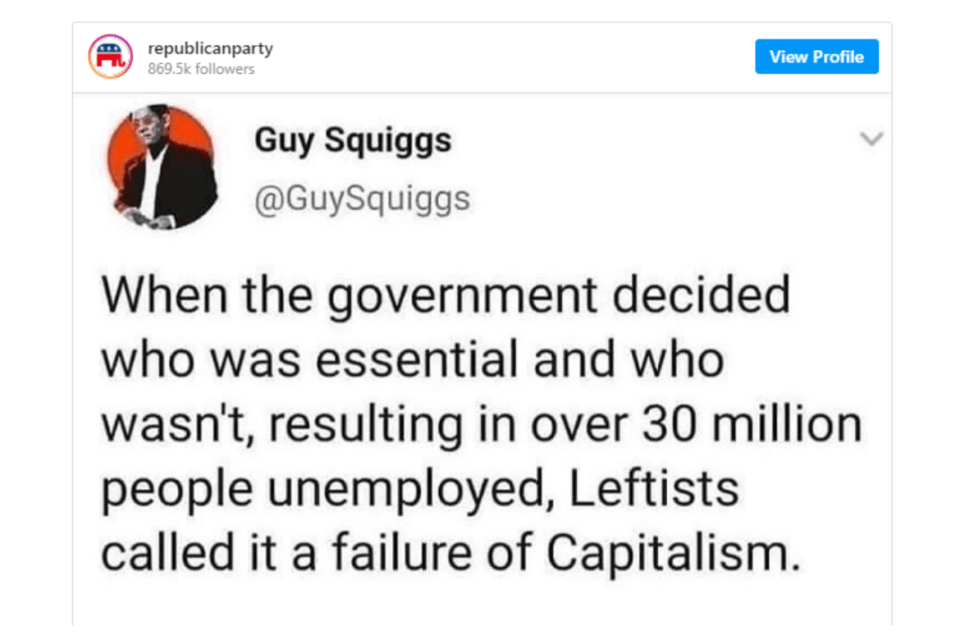 “When the government decided who was essential and who wasn’t, resulting in over 30 million people unemployed, Leftists called it a failure of Capitalism.

The government seizing control of production is certainly some sort of an ism… But it’s not Capitalism.”, Squiggly Line Guy tweeted on May 5th, making reference to government shutting down private businesses during the Coronavirus pandemic.

When the government decided who was essential and who wasn't, resulting in over 30 million people unemployed, Leftists called it a failure of Capitalism.

The government seizing control of production is certainly some sort of an ism… But it's not Capitalism.

Our books help parents teach their kids about the virtues of the free market and the dangers of socialistic policies. Find them at TuttleTwins.com

Since that time, screenshots of the original tweet have been reshared all over by several people or organizations with large followings on both Facebook and Instagram. Comedian Amiri King, the Libertarian Party of Florida, and the Facebook and Insta account for the libertarian children’s book series “The Tuttle Twins” are just a few of the big names that shared a screenshot of the tweet.

TLR asked the man who writes under the pen name “Squiggly Line Guy” the origin of his now-famous tweet and how he feels about the wide-reaching responses.

“A friend of mine, Jason, and I, were having a late-night phone conversation. Just having beers and chatting. He’s a former Bernie Bro from the 2016 election, but discovered Thomas Sowell’s works shortly thereafter. He’s reformed beautifully. We were having a discussion about businesses that have been forced to close by state and local governments across America. That topic pretty quickly transitioned into the Victory Laps that Leftists have been taking, calling Capitalism in a failure, when in fact, the markets were sabotaged by the government. The tweet itself was in essence a tweet-sized summary of what we concluded on the call.”

“I’m glad that it resonated with people. A screenshot of it was shared by the Republican Party on Instagram, Amiri King on Facebook, and was even included in a Tuttle Twins email newsletter. That’s fantastic. Just don’t forget to follow me on Twitter. The hits will keep coming.”