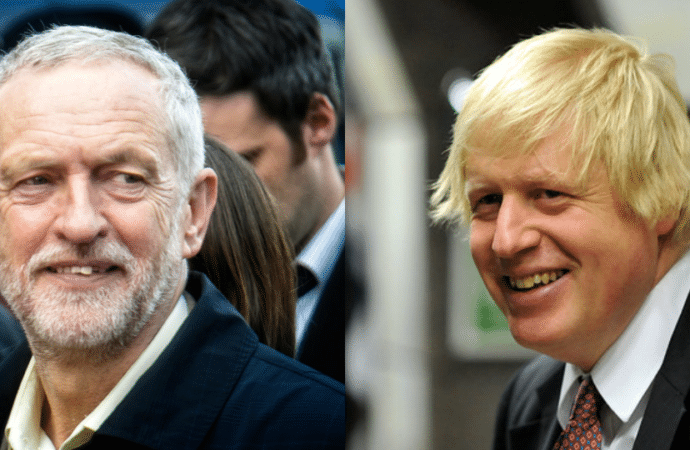 The Brits have an election coming up, and barring a miracle for the Liberal Democrats (a centrist third party), it appears anyone hoping for a leader to emerge who will be a positive political force is stuck between a rock and a hard place. On December 13th, either Jeremy Corbyn or Boris Johnson will be the British Prime Minister. It is safe to say that both will be disastrous.

The two are a shocking reflection of the other on the Left and the Right. Both have long and checkered histories of bigotry, and both support domestic policy agendas that are economically illiterate.

On the right, there is the current head of the Tories, Boris Johnson. He recently barged onto the scene of electoral politics riding a broad wave of populism, jingoism, and anti-immigrant sentiment directed at institutions like the EU in the form of the so-called “Brexit” campaign. He also has a nasty history of anti-Muslim rhetoric. In a column from 2005, he wrote that “Islam is the problem,” and that in British society, Islamophobia is “a natural reaction.” In 2018, he wrote another column that compared Muslim women who wear a burqa to “bank robbers” and “letterboxes.”

Johnson’s personal bigotry reflects the problematic trend of anti-Mulsim bigotry in the Tory party at large. This was made clear in an anonymously released dossier that outlined histories of anti-Muslim social media posts by numerous Tory chancellors.

Leading the left is Jeremy Corbyn, a more politically experienced far-leftist who has been vocally anti-NATO and anti-EU his entire career. Similar to Johnson, he has a history of bigotry, though his is of the anti-Jewish kind.

In 2014, he attended a memorial, paying respects to the anti-Jewish terrorist perpetrators of the 1972 Munich Olympics massacre, which left 11 Jewish Israeli athletes dead along with a German police officer. In a 2012 Facebook post, Corbyn affirmed his support for an artist who had a mural removed from East London—a mural which depicted Jews in hooked noses and business suits, playing monopoly on the backs of the English poor.

Unfortunately, these are just two examples of many—so many that the Chief Rabbinate of England, a non-political figure, said his history of anti-Semitism made him “unfit for office.” Video has recently surfaced of him defending a man who repeated the medieval “blood libel”—the age-old slander claiming that Jews use the blood of children in the making of matzah (a traditional brittle bread made for the holiday of Passover).

On Thursday, a dossier  (this one from the Jewish Labour Movement) leaked in a somewhat redacted form, showing levels of Labour anti-Semitism on an institutional level. It outlined a “corrosive disease” of anti-Jew activity through “unwitting prejudice, ignorance, thoughtlessness and racist stereotyping.” The report also lays the blame Labour’s of anti-Semitism problem squarely at the feet of Jeremy Corbyn, saying Labour became “a welcoming refuge for antisemites” following his ascent to leadership in 2015. It also accuses Corbyn personally of  no less than eleven instances of anti-Semitic behavior.

Electorally, it is clear that Labour is not a place for Jews, as 93% say they will not vote for the Party in December, and nearly half say they would “seriously consider” immigrating if Corbyn wins.

In fact, one of the most high-profile Labour defectors, Luciana Berger, quit the party after the increasingly hostile environment for Jews made the party a dark hive of anti-Semitism. Ironically, she is now leading an anti-Labour insurgency with the Liberal Democrats that could undermine and gut Labour support nationally.

The economic experts are all in clear agreement that the British exit from the European Union would be terrible for the British economy. One scholarly article from the Rand Corporation outlines a potential 4% GDP loss for Britain.

Boris Johnson is the most pro-Brexit of the two, while Corbyn has yet to voice his opposition to the move, despite a long history of being similarly anti-Europe.

Brexit’s impact would not be just bad for the British economically speaking, but it would also set a precedent of splintering Europe—a trend that will only help opponents of the West like Vladimir Putin. Institutions like the EU and NATO have long served as an effective bulwark against further Russian incursion into Eastern and Central Europe. The explicit anti-EU attitude of Johnson combined with Corbyn’s history of euroskepticism could not make the two British options in this election more enviable for Putin and others who wish to see a splintered Europe.

Acts and ideologies of European separatism will benefit one leader in particular, and his worldview: Vladimir Putin. Any splintering of European institutions will, of course, help the force that Europe unified against. As such, the effectively pro-Russian worldviews of both Johnson and Corbyn. Furthermore, their backwards and bigoted worldviews regarding ethnic and religious minorities spell a troubling future for Britain, barring a miraculous win from the Liberal Democrats.