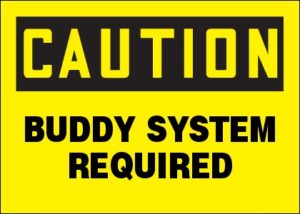 Ernst sent a letter to Brig. Gen. Heather Pringle, commander of the U.S. Air Force 502nd Air Base Wing and Joint Base San Antonio, outlining her suggestion. It’s the result of Ernst’s recent trip to the base, where she engaged in discussions with service members on how to prevent the sexual assault problem.

Ernst wrote that she was “surprised to hear that the Air Force was the only service that did not require such a system for all of its students in training status.” She added that, “This is is disappointing, as the buddy system not only can reduce vulnerabilities for sexual assault, but also helps young servicemembers make better decisions.”

The Iowa senator believes the system is one of many “concrete steps” that can help combat the military’s sexual assault problem.

Ernst is intimately familiar with the inner-workings of the military, having served as a logistics officer in the Iowa National Guard. She eventually reached the rank of lieutenant colonel and deployed to Kuwait during the Iraq War in 2003.

As a member of the Senate Committee on Armed Services, Ernst worked hand-in-hand with Democratic Sen. Claire McCaskill on the Military Retaliation Prevention Act, which aims to protect survivors of sexual assaults from retaliatory actions within their respective units.

F-35 Ejection Seats Fixed, Will Not Snap The Necks Of Lightweight Pilots