Bernie Sanders supporters were “weeping” on the floor of the Democratic National Convention Monday as the Vermont senator prepared to formally endorse his rival Hillary Clinton.

“I think it’s fair to say, no one is more disappointed than I am,” Sanders told a cheering crowd.

Some of his supporters apparently saw that as a challenge, bursting into tears and dramatically wiping tears from their eyes as Sanders spoke. Appropriately, their crying faces were quickly turned into gifs.

Tears for Bernie at #DemsInPhilly pic.twitter.com/ovhQgeof5x

“There are so many tears in this room during Bernie’s speech,” one user tweeted.

There are so many white tears in this room during Bernie’s speech. #DemsInPhilly

Some reacted to the tears with admiration. “Quite something to see much genuine weeping for Bernie,” Leslie Stojsic tweeted.

Others, even Sanders supporters, mocked the tears.

Quite something to see much genuine weeping for Bernie. 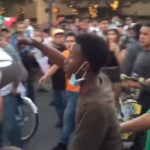 Petition To Remove Air Conditioning From State Department Has Over 1,800 Signatures