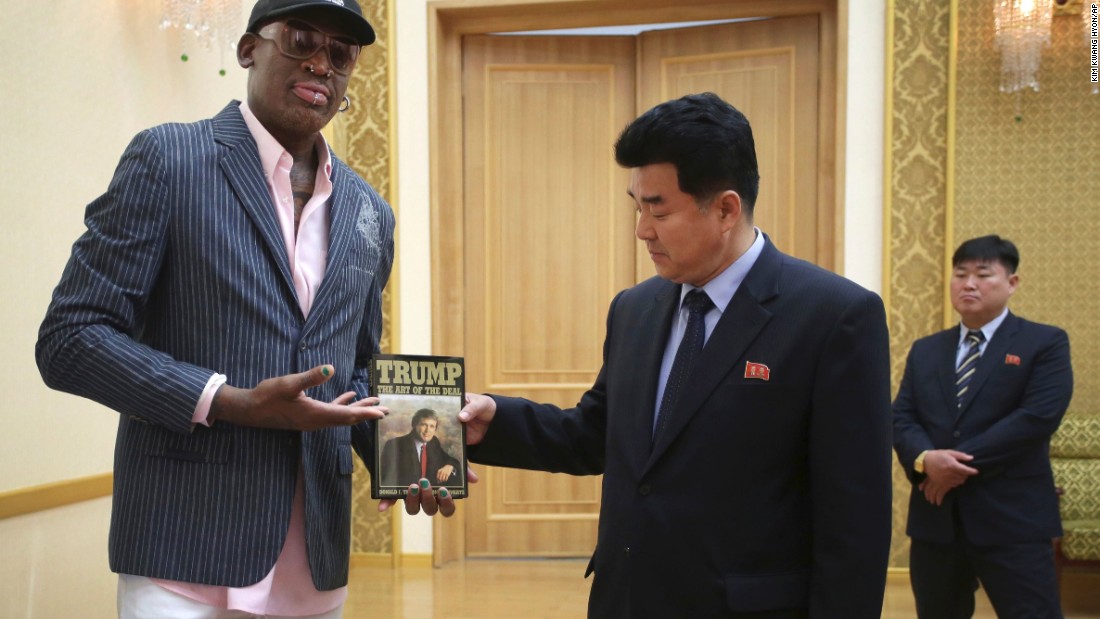 Dennis Rodman is in North Korea, and he didn’t arrive empty handed.

The former NBA star gifted North Korean dictator a copy of President Donald Trump’s book “The Art of The Deal.” Other gifts included a copy of “Where’s Waldo? The Totally Essential Travel Collection,” two autographed jerseys, a mermaid puzzle, and two sets of soap, everything a young despot needs.

The 1987 publication explains Trump’s negotiation tactics, encouraging readers to “think big,” “use your leverage,” and “maximize your options.” If Kim reads the book, he might gain valuable insight into Trump.

Rodman has made several visits to North Korea over the years, carrying out what he likes to call “basketball diplomacy.”

The former Piston’s player has yet to meet his “friend for life” Kim Jong Un, but he has met Minister of Sports Kim Il Guk, who called Rodman an “old friend” of the regime.

It is unclear exactly what Rodman is doing is doing in North Korea. Rodman claims that he is in North Korea “to see some friends and have a good time,” but he also told reporters that he is visiting the North “to open a door.” While he is a friend of the president, who was his boss on “Celebrity Apprentice,” Rodman has repeatedly denied any connection to the White House.

Nonetheless, Rodman feels that Trump is likely pleased with his latest visit. ” I’m pretty sure he’s pretty much happy with the fact that I’m over here trying to accomplish something that we both need,” told reporters earlier this week.

Some observers initially suspected that the Basketball Hall-of-Famer may have been involved in the release of Otto Warmbier, a University of Virginia student detained last year for allegedly stealing a political propaganda poster, a crime against the state. The Department of State has said that Rodman played no part in the student’s release.

Rodman’s visit comes at a time of heightened tension between Washington and Pyongyang. In recent months, North Korea has been regularly testing ballistic missiles, including many new systems, with promises of an eventual intercontinental ballistic missile test in the near future.

Remembrances of Nutjobs Past