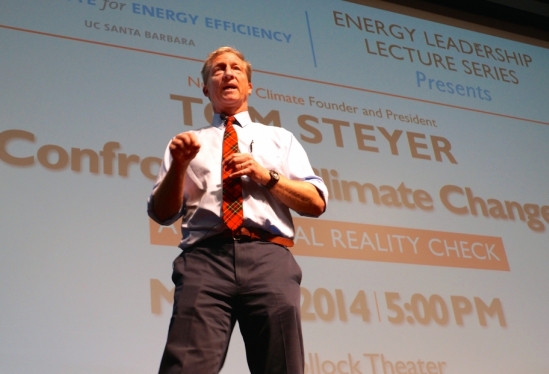 Liberal billionaire Tom Steyer is testing the political waters in California, commissioning a poll to gauge how well he would fare against fellow Democrats in the 2018 gubernatorial election.

Three sources familiar with the poll told The Hill that Steyer’s “political team is querying whether California voters know Steyer, and whether they are leery of electing someone with no political experience to the state’s highest office.”

“It’s no secret that Tom Steyer is considering running for office, and he’ll make a decision later this year,” Rose Kapolczynski, a top Steyer political advisor, told The Hill. “We aren’t going to discuss our research program in the news media.”

Steyer eventually founded his own activist group, NextGen Climate Action, with the hopes of mobilizing young voters around the issue of global warming. Steyer and NextGen have spent tens of millions of dollars to get Democratic candidates elected, though with mixed success.

Steyer personally spent about $163 million in the last two election cycles supporting Democratic candidates, but the Democratic bundler has since moved “beyond” environmental issues.

Steyer told Buzzfeed in February that “under the new Trump administration, progressives cannot consider causes in isolation.” He’s since attacked President Donald Trump nearly every day on social media, not limiting himself to global warming.

Rumors swirled for years that Steyer’s activism was aimed at setting him up for a gubernatorial or Senate run, but Steyer said in January that Trump’s election made him reconsider a political career.

However, publicly-available polls suggest Steyer’s still a longshot candidate. A poll from late March found that Newsom held 24 percent support among California voters while Steyer’s support was in the low single digits.

Fmr. Congressman Kucinich: Deep State’s Intention is to Take Down a President