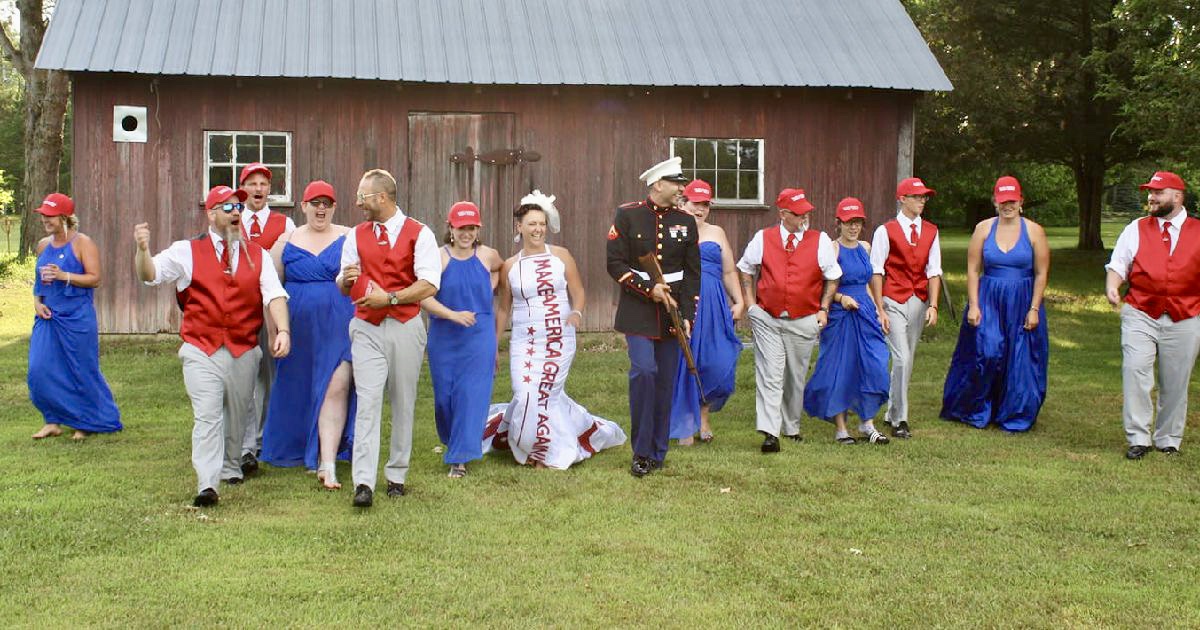 It looked like America threw up all over my wedding, and I’m not sorry,” the bride told Fox 17.

Audra told Fox 17 that the couple saw their wedding as a chance to celebrate both their love for each other and to celebrate America’s 45th President.

The  bride wed her Marine husband Jeff on July 4th in Kalamazoo Michigan, according to the New York Post.

The bride wore a traditional white gown as she walked down the aisle, but things turned #MAGA during the reception.

No detail was overlooked, from the groomsman’s “Don’t Tread on Me” cufflinks to a petition for a heartbeat bill on every table according to Fox 17. The bride’s nails were even painted red, white, and blue to look like the American flag.

Audra’s reception dress stole the show as Andre Soranio professionally designed it out of a Trump flag. Soranio is well known now for having designed MAGA dresses for singer Joy Villa who made national news when she wore them on the red carpet at the Grammy’s.

“It looked like America threw up all over my wedding, and I’m not sorry,” bride Audra Johnson said.

Johnson says in addition to celebrating their love, she and her husband decided to use their wedding day as an opportunity to celebrate President Donald Trump. No detail was overlooked, down to the groomsmen’s ‘don’t tread on me'” cufflinks. Each reception table featured a petition for an anti-abortion “heartbeat bill.” Even the bride’s nails were painted to look like American flags.

As is the focal point of every wedding, the bride’s dress stole the show.

“The dress is actually an Andre Soriano original,” Johnson said. “It’s actually made out of a MAGA flag.”

Audra told Fox 17 that everyone was welcome at the couple’s ceremony in spite of its bold MAGA theme. Mrs. Johnson’s maid of honor and lifelong best friend is a Democrat.

“We were going to do our photos with the Trump hats, and she said, ‘You know I love you, but I can’t wear the Trump hat,'” Johnson said. “I said, ‘It’s OK. It’s OK. Just wear a red hat. We still love you. We can have completely different opinions about everything and still love each other.”, according to Fox 17.

Not all of the family was supportive of the couple’s choice for their big day, however, including the groom’s father.

“He sent us a text message,” Johnson said. “It said, ‘As long as you support that racist in the White House, I won’t be attending your wedding.’ Which is sad but we did have a lot of people that loved us and showed up, according to Fox 17.

Regardless of what one might think of the couple’s wedding theme, it’s probably safe to say it went off with a “yuge” bang.