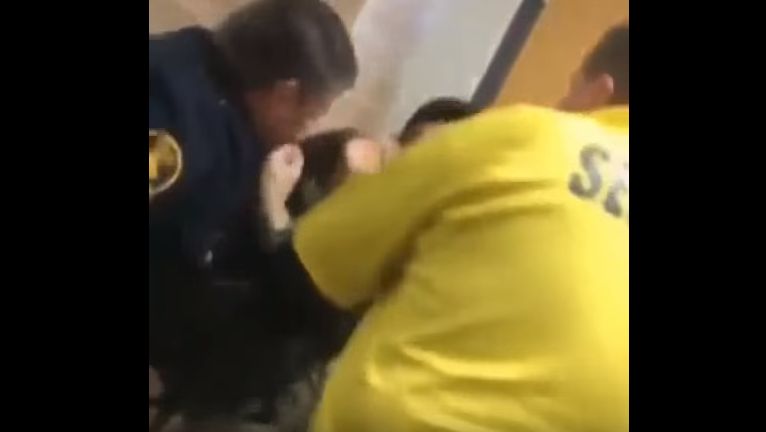 An Omaha police officer has been reassigned and placed under investigation after he was caught on video punching a student in the face while intervening in a fight.

The video, recorded by a student at Millard South High School, shows school resource officer Nicholas Caniglia throw at least five punches towards the face and upper body of a student after yanking him away from a fight with another student. At least some of the punches appear to connect.

After a struggle lasting about 15 seconds, the student is brought under control by Caniglia and school security officer Tim Kimpson, who appears to tell Caniglia to stop his pummeling.

The Omaha Police Department has reassigned Caniglia while it investigates the matter. A student at the high school has also been cited for misdemeanor assault in connection to the incident, though it’s not known if it’s the same student being punched in the video. Nobody was seriously hurt in the incident.

According to the Omaha World-Herald, which obtained Caniglia’s police report, Caniglia says he came upon the fight while it was in progress, and saw Kimpson get punched in the face. Caniglia says he was struck in the face as well during his intervention

The video is the latest in a string of videos that have caught police using significant force against students. In October, Columbia, South Carolina officer Ben Fields was fired after the release of a video that showed him flipping over a girl’s desk while she was still in it, and then dragging her across the floor.

A similar fate may be in store for Caniglia if Omaha police decide he used excessive force.

“We are looking into what precipitated the officer’s actions and if they were appropriate considering the totality of the circumstances,” police spokesman James Shade said in a statement to the press.

In addition to the 15-second clip circulating online, a longer video showing the beginning of the fight was obtained by local news station KETV. The incident starts with a verbal argument between two students, causing one to charge the other, with the two then rolling on the floor fighting each other. Kimpson can be seen intervening immediately, though unsuccessfully, while Caniglia only arrives on the scene some time later.